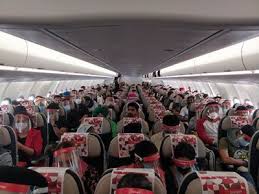 The flight departed from New Delhi at 8.10 am IST and is scheduled to reach Toronto at 6:40 pm (local time). The airline chartered a wide-body Airbus A330-900 Neo aircraft from Hi-Fly for this flight. The twin-aisle A330 Neo aircraft has a configuration of 353 economy and 18 business class seats.

Ajay Singh, Chairman & Managing Director, SpiceJet said, “Our first-ever long-haul charter flight to Canada is yet another example of our commitment to helping as many people as we can to get back home to their families in these troubled times.”

“Being the first Indian budget airline to operate a non-stop long-haul flight to North America is a proud moment for the SpiceJet family. We have operated flights across the globe repatriating close to 85,000 people and transporting over 28,000 tons of medical and essential supplies and we intend to keep on with our efforts,” he added.

On August 1, SpiceJet had repatriated 269 Indians who had been stranded in Amsterdam to Bengaluru and Hyderabad.

Further speaking about the tragic air crash at Kozhikode International Airport in Karipur, Kerala, Singh said: “We, at SpiceJet, are extremely saddened by the Air India Express tragedy and extend our deepest condolences to the families of the bereaved and pray for a speedy recovery of those injured.”

Yesterday, in a tragic incident an Air India Express flight, 180 passengers and 6 crew members on board,  skid off the runway and split into two at Kozhikode International Airport in Karipur, Kerala.

The flight was operating under India’s Vande Bharat Mission and was returning from Dubai to Calicut (or Kozhikode).

According to reports, at least 18 people have died so far in the accident including two pilots of the plane. Remaining four crew members are safe and sound.