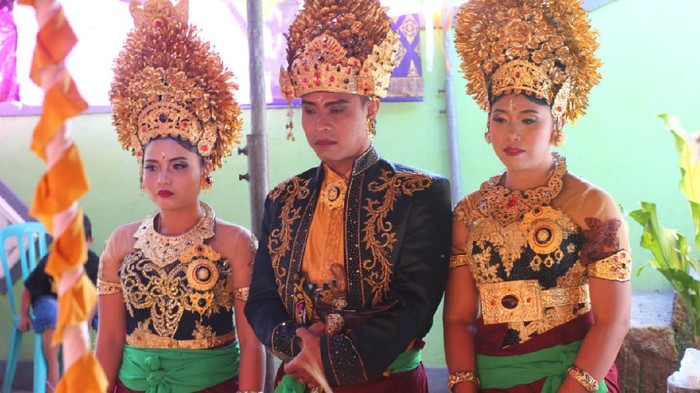 A 39-year-old man from Bali’s Buleleng regency has attracted nationwide attention this week, after he claimed that his spouses had mutually agreed to enter a polygamous marriage.

The man, identified as I Made Sukartayasa, told local media outlets that he was a widower, whose first wife passed away back in 2007. He admitted to having secretly dated the two women, identified as Luh Kariati and Komang Tri Parwati, at the same time for at least two years. ADVERTISING

“Afterwards there was a quarrel and at the time I was confused because they asked me to choose one of them. I was already comfortable with them both, it feels impossible to choose,” Sukartayasa said, adding that the women later reached the unusual agreement that both would marry Sukartayasa.

“It was based on a mutual agreement. Yes, I arranged for them to meet. I don’t really understand, maybe the two felt comfortable,” Sukartayasa said.

In 2017, Sukartayasa married Kariati first, which was followed with his marriage to Parwati six days later. According to reports, they finally held a traditional and religious wedding ceremony in June of this year, photos of which circulated widely and attracted attention online.

Sukartayasa’s polygamous marriage has since been picked up by various local media outlets, none of which appear to have included comments from either of the two women central to the story.

Polygamy is sanctioned under Balinese Hinduism, marriages of which are regulated under traditional customs, or adat. In 2014, a documentary titled Bitter Honeyhighlighted the issue of polygamy in Bali, noting that the practice is considered legal in the province and officially accounts for 10 percent of the province’s legal marriages at the time.

The work, directed by American anthropologist and filmmaker Robert Lemelson, was perceived less as a call against polygamous marriage, but more of an awareness-raising campaign on women’s issues and the cycle of abuse that arise from these unions.