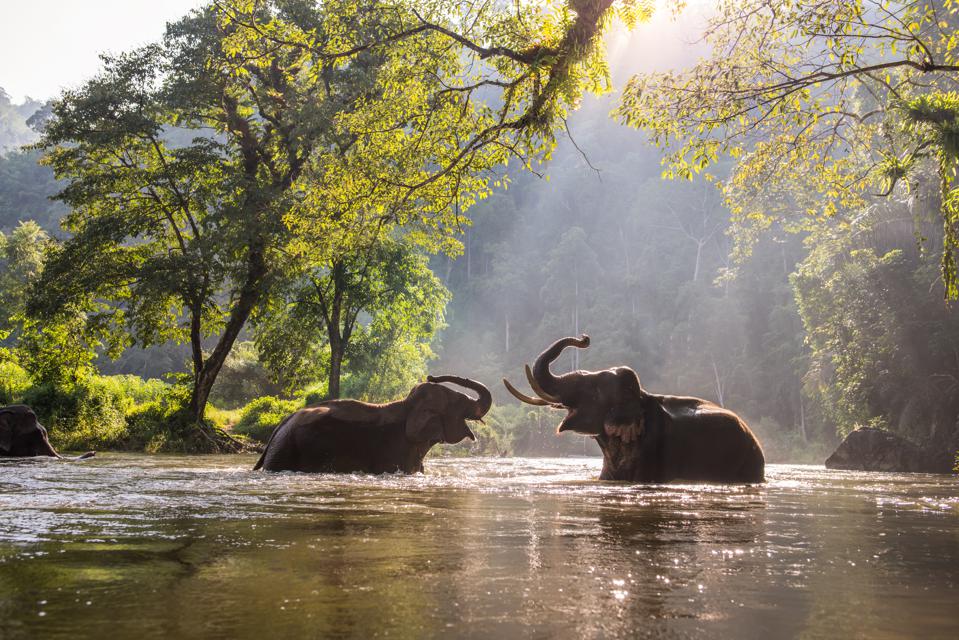 Rife with vibrant cities, ornate temples, and lush swathes of rainforest, it’s easy to see how Thailand has become one of Southeast Asia’s most popular countries for international tourism. While some may prefer to spend their time lounging on the sunny beaches of Phuket or sipping cocktails atop Lebua Tower’s Sky Bar, those who feel most at home in the great outdoors will find a rich array of national parks scattered throughout the country. For those who wish to bask in the beauty of towering limestone karsts, ancient untouched rainforest, and thunderous waterfalls, Thailand’s national parks perfectly fit the bill.

Consisting of roughly 1,100 square miles of untouched jungle, Kaeng Krachan is the largest national park in Thailand, as well as one of the premier destinations in the country for spotting rare Southeast Asian wildlife. The park rests along the Burmese border, combining with neighboring Tanintharyi National Park to provide a sprawling paradise of pristine rainforest that’s home to leopards, sun bears, elephants, jackals, and hundreds of other elusive indigenous species. While wildlife can be encountered in abundance within the park, there’s no shortage of natural sites either – Kaeng Krachan is full of lengthy hiking trails that lead to surging waterfalls, deep caves, and hundreds of tiny ponds.

Located roughly ninety minutes west of the Cambodian border, this sprawling reserve is home to some of Thailand’s most vulnerable indigenous species, including Siamese crocodiles, dholes, Asian elephants, and lar gibbons. While birds, reptiles, and mammals can be encountered in abundance throughout the park, Pang Sida is most famous for its invertebrate species, with hundreds of colorful butterfly varieties thriving along the park’s rivers and streams. For a glimpse of one of the park’s most marvelous natural sites, take a leisurely stroll just one mile north of the reserve’s headquarters to find Pang Sida waterfall, a free-flowing cascade framed by brilliant green vegetation.

Just north of Phuket lies a cluster of popular national parks, with Khao Sok earning nationwide acclaim for its jagged limestone karsts and large swathes of virgin rainforest. The park’s lush jungles have existed for millennia, fostering a rich array of native wildlife throughout the park, with hundreds of bird and reptile species, over one thousand different varieties of orchid, and elusive beasts such as elephants and tigers calling the park home. After a long day of hiking, visitors can relax along the shores of serene Cheow Lan Lake, one of the most popular destinations in the region for kayaking, canoeing, and spotting native Thai wildlife.

A popular day trip destination from nearby Chiang Mai, Doi Inthanon has grown to become one of northern Thailand’s most popular national parks since its establishment in 1972. Visitors can find spectacular views of the surrounding landscape from the peak of Doi Inthanon, the tallest mountain in the nation standing at a height of 8,415 feet. While the peak is only accessible by car, the park is streaked with hiking trails crossing through lush emerald-green forest and passing towering waterfalls. Birdwatchers take note – the park is home to a rich array of native avian species, making this one of the top destinations in Thailand for birding.

Previous articleIATA: Air travel unlikely to bounce back before 2024
Next article10 Best Free Things to Do in Kolkata