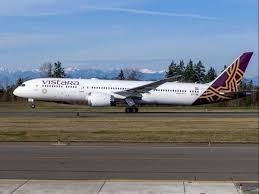 The flights would be operated from Delhi under the travel bubble and will mark a milestone in the airline’s growth.

Building an international medium haul network has always been a plan of Vistara’s strategy.

Plans were drawn up to launch  flights to London, Tokyo and Moscow in the summer schedule, but the Covid-19 pandemic forced it to go slow.

Now the airline is looking to operate scheduled flights to Europe with the proposed induction of its second Boeing 787-9 aircraft next month.

Currently, Vistara has 42 aircraft and the second Boeing  787 aircraft is due early in August.

Vistara has filed for slots at the Delhi airport and is also training pilots as it prepares for operations.

The Delhi-London flight is being planned from mid-August, while services to Paris and Franfkurt would be launched later.

“Vistara has around 20 pilots for its 787 operations, each with over 500-600 hours of flying experience on the aircraft.

“A few more pilots are undergoing training and this would allow the airline to operate both the planes to Europe by September,” a source said.

“Updates with regards to international operations will be provided at an appropriate time,” Vistara said in an email.

Recently, India operationalised travel bubbles with the US, France and Germany.

Discussions are underway with the UK.

These arrangements allow airlines to launch scheduled flights between countries.

However, there are restrictions on who can travel on these flights.

For instance, Europe is not allowing leisure travellers from India.

Except in certain cases, an Indian passport holder will not be able to travel to the US via Frankfurt or Paris on these flights.

The challenge for Vistara would be to fill up the flights given the modest demand and travel restrictions.

“There will be no point in flying the aircraft empty,” an industry expert remarked.

Sources said Vistara will try to wean away traffic from Air India by highlighting its superior product.

The airline will also try to attract students and corporates.