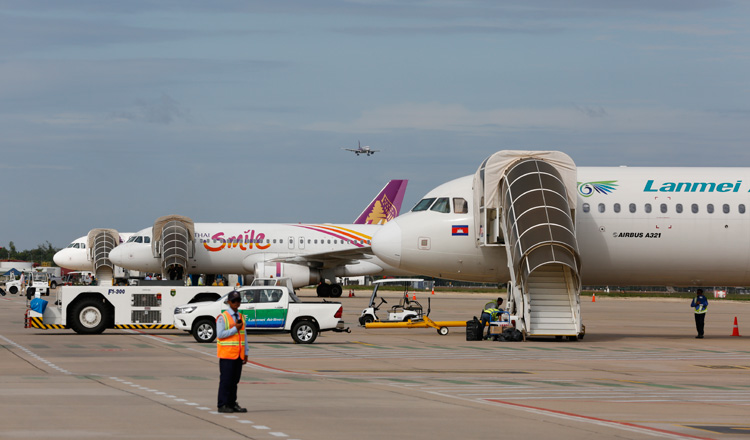 The Minister in charge of the Secretariat of State for Civil Aviation Mao Havannal said the number of passengers arriving at Cambodian airports has increased since the government lifted the travel ban for people from six countries.

The statement was made at a press conference held today after a Memorandum of Understanding was signed with the Ministry of Information and the Ministry of Posts and Telecommunications regarding measures to be taken to prevent radio and TV airwave frequency disrupting aircrafts band.

Havannal said within the last two months, the number of passengers has increased to around 1,000 per day, a significant increase on the 160 per day being received between March and May.

“Prime Minister Hun Sen’s decision to lift the ban on six countries in June has resulted in an increase of between 800 and 1,000 passengers per day. Amid the new influx, we are still maintaining the Ministry of Health’s COVID-19 prevention measures,” he said.

“The number of flights has also increased. Since June, we have been receiving between 15 to 20 daily flights per day in the capital,” Havannal said.

In May, the government announced the lifting of the travel ban for people from the six countries, namely Iran, Italy, Germany, Spain, France and the United States. However, all passengers from these countries are required to have health certificates to prove they are free of the virus before travelling to the Kingdom.

Havannal said that before the pandemic, there was an average of 10,000 passengers arriving per day in the capital’s airport, with nearly 15,000 recorded some days in the last few months of 2019.

However, because of the pandemic passenger numbers initially dropped by 10 to 15 percent in January before dropping by around 40 percent in February, he said.

Between March and May, incoming passenger numbers dropped by over 95 percent, he added.