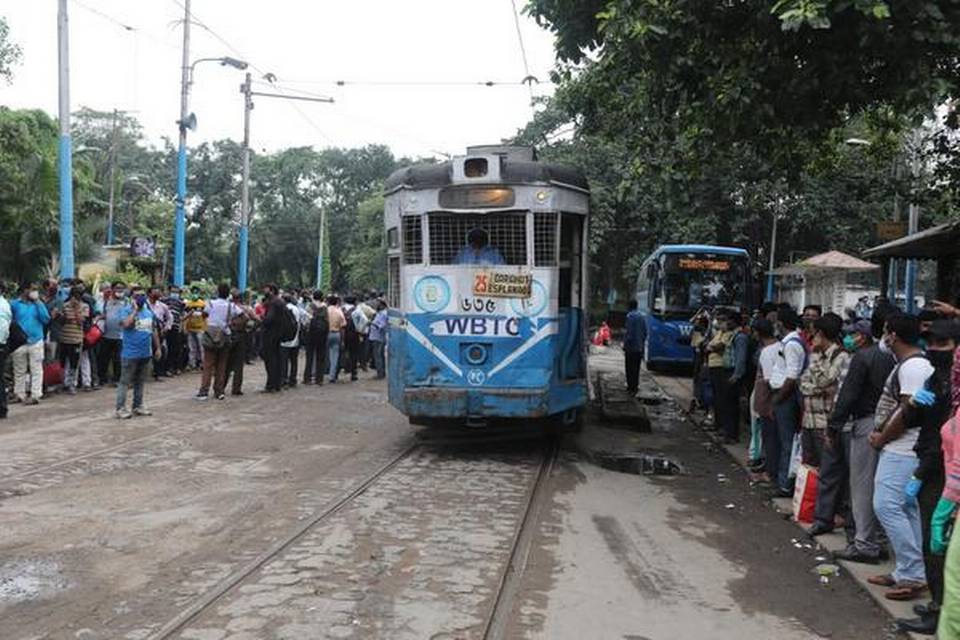 When cyclone Amphan battered Kolkata on May 20, the devastation it brought also grounded Kolkata’s iconic trams, which had already suspended operations since March because of the COVID-19 lockdown. Before the lockdown, six tram routes were functioning. By this week, tram services on three of the routes are operating again — the first route to be operational was Tollygunge to Ballygunge, followed by Rajabazar to Howrah, and the third being Gariahat to Esplanade.

“Due to cyclone Amphan, several tracks were damaged by trees and the overhead wire system got badly damaged. Since then, restoration work by the West Bengal Transport Corporation (WBTC) has been underway. The WBTC’s team of engineers have been working night and day to restore tram tracks,” Rajanvir Singh Kapoor, Managing Director, WBTC told The Hindu.

Mr. Kapoor said that no passengers without masks were being allowed to board trams, and that disinfection of tram cars and depots is being carried out regularly before and after each shift.

He added that a heritage art installation has been displayed inside the tram cars by the WBTC from earlier this month to generate awareness on Kolkata’s unique mode of transportation. The installation mentions that the city had its first horse drawn tram-cars as early as 1873, got electrified cars in 1900, and since 1902, electric tram cars have been an irreplaceable mode of transport in the city.

The operation of trams when transport in Kolkata is yet to be fully functional has brought cheer to commuters in the city. While citizens’ collectives and other organisations have welcomed the move, they have also emphasised that trams be made a more integral part of transportation in the city.

“Trams should be an essential mode of transport in the city. It is not enough that they should be left as a symbol of heritage only for ornamental value. At one time, there were 37 tram routes in Kolkata, but now we are struggling to have six,” Debasish Bhattacharya, president, Calcutta Tram Users Association (CTUA), said. Representatives of CTUA, who campaign for the necessity of having more tram routes, emphasise that it is not only a clean mode of transport but also helps in reducing traffic snarls in a city that has the lowest road space among India’s major metropolises.

However, trams are no longer considered the best mode of transportation for Kolkata. From 37 routes covering 70 km in the 1960s, only six routes covering about 20 km remain operational. Though the number of passengers, daily revenue and the number of staff have dwindled, experts believe that investing in trams can greatly aid to Kolkata’s transport system.

Previous articleMigrant workers from Asean allowed to return to Thailand as country eases lockdown
Next articleSpiceJet To Operate Flights To UK, Day After Getting Similar Approval For US