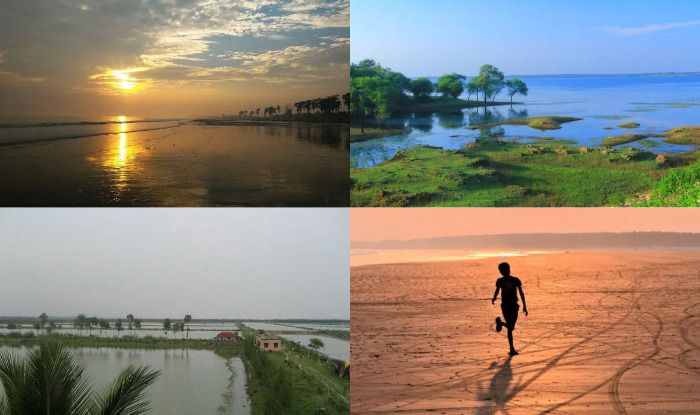 Kolkata’s thriving city streets, quaint coffee houses, busy fish markets and cultural landmarks are just some of the things that give this city its charm. But the hustle and bustle of the city can take its toll, and it’s important to take a break from it all sometimes and venture out to other parts of the Bengali motherland. So take a day to relax, unwind and celebrate the cultural, historical and natural beauty of Bengal at these places to visit near Kolkata for 1 day.

The unfrequented beach of Tajpur lies around 170 km from Kolkata, which translates to a three-hour drive. You can also catch buses to Chaulkhola and head to the beach from there. A day spent walking along this long beach stretch, with the waters of the Bay of Bengal mixing with the mud on your feet, can be really rejuvenating. From the beach, you can also see the Tamarisk forests some distance away. For adventurers, Tajpur also hosts activities like rafting, paragliding, kayaking and others, and this is what most visitors to this beach indulge in. You can spend your day doing both before calling it a day and returning to the city in the evening.

We have another beach in this list, but Bakkhali is closer to the famed Sunderbans, which are mentioned a few times here. It is also closer to Kolkata itself, with a distance of around 135 km separating the two. The beach, located in the islands spread across the bay, is very well-connected by roads and can be reached in just about the same time as Tajpur. You can also travel by train up to Namkhana and catch the local transport from there to the beach. Here, you can spend your day playing with the waves or exploring the Benfish Harbour and mangrove and crocodile forest. The beach itself stretches as long as 8 km up to Frasergunj, which is a place worth exploring on its own. Watch the sunset on the sea here before heading back to the city.by TaboolaSponsored LinksYou May LikeBangladesh: Work-From-Home In The US May Pay You More Than You Think!Work Online USA | Search AdsThese Top 5 VPNs That Will Make Zoom UnbreachableTheTopFiveVPN

Farther away from the city, Mukutmanipur is where you go if you want to totally disconnect yourself from the city for a day and immerse yourself in a rustic environment. Located at the confluence of the rivers Kumari and Kansabati, Mukutmanipur is a small, serene town surrounded by lush green forests and hills. Oh, and it is also home to the second-largest earth dam in the country, stretching 10.8 km. You can go boating along the blue-watered lake or simply relax on a hillock and enjoy the sunset here, without the commotion and rush of the city around you. Or you can sit down for a picnic by the banks of the Kansabati River or visit the watchtower at nearby Jhilimili. Mukutmanipur lies around 250 km from Kolkata by road, and there are trains and buses to nearby Bankura too.

For a more mainstream destination, you can visit the beach resort town of Digha. Despite its popularity, its white sandy beaches still appear untouched. From here, you can catch incredible views of the sea and land. Although best preferred as a weekend destination, you can still spend a day here and still come back to Kolkata feeling refreshed. Just spend the day at Digha beach or visit its museums or temples; this town has something for everyone. Buses are considered the most economical way to travel to this place, but you can also reach Digha by train in around 3 hours. A drive is generally the fastest way to Digha; the 190 km between Kolkata to Digha can be covered in around 2 and a half hours.

We’ve covered natural beauties around Kolkata so far, but history buffs should not feel left out. Within the Bankura district of West Bengal lies Bishnupur, a town of historical significance that lies around 135 km from Kolkata. You can drive to this place in a little over two hours, or take a train to the main station of Bankura, which is around 35 km from the town. Once you get to Bishnupur, you will be treated to majestic, intricately-carved terracotta temples. These temples are a symbol of the town’s cultural legacy; Bishnupur was home to several cultural elements in the era of the Malla Dynasty. Centuries later, these temples and the famous Baluchari saris still remind us of Bishnupur’s legacy. You can visit the Bishnupur Museum to find out more about its history, or visit the Rasmanch tower and Jor Bangla Temple.

Lying on the edges of the border to Bangladesh, the town of Taki is relatively untouched by other tourists and travellers from the city. This makes it a perfect escape from the city, a place where you can just relax and come closer to nature. Taki lies on the banks of the Ichamati River, and you can spend the day by the banks, take shelter at the Bagan-Bari, or take a boat ride to the Machranga Island. On the other side of the river lies Bangladesh, and the boatmen that ferry these waters carry their respective country flags to differentiate their nationalities. Taki lies just around 80 km from the city and can be reached in around 2 hours by road. You can also take trains up to Sealdah or the nearby Hasnabad.

Spread across nearly 70 hectares, the Bethuadahari Wildlife Sanctuary is actually an extended deer park. The deer here are the star attraction, but you can also see other incredible wild animals like the monitor lizard, porcupine and certain species of pythons, snakes and jungle cats. Bird lovers will also be interested to know that the sanctuary is home to around 50 species, including the Indian cuckoo, Hawk-Cuckoo, and parakeets. The flora of this reserve is also worth noting, and you can find jackals and Bengal foxes here too. Bethuadahari lies around 155 km away from the city airport and an hour’s drive from Krishnanagar. You can also catch a local train from Sealdah to Krishnanagar. By road, Bethuadahari is a little over three hours away from Kolkata, with many buses connecting the two places.

And finally, no list of places to visit near Kolkata can be complete without mentioning the Sundarbans National Park. The incredibly vast Sundarbans covers 4,262 square kilometers, so one day is definitely not enough to cover it all. But you can still come here for a day and enjoy the sights and sounds of nature at Sundarbans, which lies at the south-eastern end of the state. This delta is famous for being home to the largest tiger reserve in India at 2,585 square km and its dense mangrove forests. The national park lies just a three-hour drive of 112 km away from the city, and you can also catch local trains to Canning that take half that time. There are several locally shared vans from Canning to Godhkhali Jetty, where you take a boat to the Sundarbans.