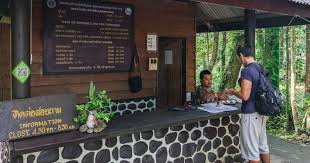 Tourist favourite Thailand might be tourist-free at the moment – and hurting economically as a result – but that hasn’t stopped debate mounting about dual pricing at the nation’s tourist attractions, where foreigners are some­times charged significantly more than their Thai counterparts.

According to a recent Bangkok Post article, the timing of this discussion is “particularly appropriate” because, with borders closed to international arrivals, the nation’s tourism industry is relying on the support of domestic travellers to survive. And included among those internal adventurers are “tens of thousands of expatriates who live in the country year-round and pay taxes” and who, if online gripes are anything to go by, are on the whole expected to stump up the same fees as foreigners are asked to pay.

One such expat is Richard Barrow, who oversees the 2PriceThailand Facebook page and the Two Price Thailand Twitter account. On July 14, Barrow spelled out the purpose for the platforms on Facebook: “This group is NOT for debating whether there should be a #2priceThailand policy or not.” Rather, members are invited to post pictures of attractions with more than one entry fee and advise whether they “personally think it is worth the inflated price”. Barrow advocates what he calls the “right to choose” and believes that sites should clearly advertise their tariffs “so that foreign tourists can choose to boycott”.

Particular umbrage is taken with venues that advertise their alternative costs “in a way that is both sneaky and insulting”. According to the Bangkok Post, such “insult” is delivered when attractions post the locals’ price in Thai numerals, which most foreigners cannot read, leaving sightseers from overseas unaware that they are paying more.

A ticket office at The Grand Palace in Bangkok. Photo: ShutterstockBut surely there is room for debate on dual pricing? The practice is neither new nor limited to Thailand – attractions across Asia have been charging locals less, and inspiring grumblings among those for whom the fees are higher, for years.

The arguments in favour of dual pricing can appear compelling: the extra money goes toward maintenance; visitors from overseas can often afford to pay more; locals, whose taxes contribute to the upkeep, should not be priced out of visiting their own attractions.

Of course, there are those who counter these arguments. On blogs and social media platforms, images of poorly preserved venues are posted in dismissal of claims that sites are properly managed. Sure, travellers from Britain or the United States might be able to afford the 500 baht (US$16) entrance fee at Bangkok’s Grand Palace (it’s free for Thais), but “imagine tourists from Vietnam or Cambodia”, as one member of 2PriceThailand posted. And if we’re talking taxes, then what about the expats who pay theirs locally?

At its crux, Barrow’s call for transparency is not unreasonable. It is also not 2Price­Thailand’s end goal. “We respectfully request a transparent pricing system in Thailand as the first step. But, ultimately we would like to see the #2PriceThailand policy abolished,” states the Facebook page.

And the movement appears to be gain­ing traction. The Bangkok Post reported that the issue of dual pricing was recently raised during a panel discussion on the future of Thailand’s tourism industry at the Foreign Correspondents’ Club of Thailand, in the capital, during which Tanes Petsuwan, deputy governor for marketing communications at the Tourism Authority of Thailand, said he had spoken to officials about the matter.

“This would be a very good time to reform tourism and make it right,” he told attendees at the event.

Hear, hear! Although surely there are more pressing matters to attend to, such as concentrating on community-based tour­ism and protecting the environment at overwhelmed destinations?

Anyone with an extreme desire to travel but who is unsure whether they will be allowed into their country of choice should check Lightfoot Travel’s Covid-19 travel restrictions tracker. The tour agency, which in “normal” times designs luxury adventure itineraries from offices in Hong Kong, Singapore, Dubai and London, has collated official restrictions, entry policies and quarantine measures – which are updated as and when alerts are received – to help those suffering from unrequited wanderlust decide whether it is worth the trouble of preparing to travel.

Simply enter your desired destination into the search bar to see if a holiday is on the horizon. Spoiler alert: it probably isn’t.

Bali is home to the ‘world’s best hotel’

A market in Ubud, Bali. Photo: ShutterstockWhen the Indonesian island of Bali reopens to international arrivals on September 11, it will do so with two new accolades under its belt – as home to the world’s best hotel and as one of the best “cities” in the world, at least according to readers of Travel + Leisure magazine.

The American publication’s annual “world’s best” lists were recently released and Capella Ubud ranked first in the hotel line-up, with one former guest describing their stay there as a “magical experience”. Other high-scoring properties in Asia included The Ritz Carlton, Bali, in fourth place, and the Waldorf Astoria Maldives Ithaafushi, at No 5.

Meanwhile, the town of Ubud, in Bali, known for its temples, rice paddies, monkeys and, arguably, for being something of a tourist trap, featured in the top 10 best cities, at No 9. It was outdone by five other Asian urban destinations: Hoi An, Vietnam (third); Chiang Mai, Thailand (fourth); Kyoto, Japan (sixth); Udaipur, India (seventh); and Luang Prabang, Laos (eighth).