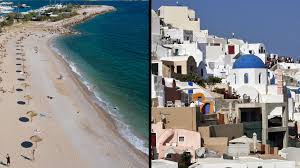 Some hotels in Greece have started drastically cutting the prices of their rooms in an attempt to boost tourism following the coronavirus pandemic.

The country reopened its borders on 1 July, but it seems as though holidaymakers haven’t started rushing back just yet, prompting some hotels to slash their prices by as much as 40 percent.

Greece has been allowing British citizens to enter since last Wednesday, but is carrying out tests on those who enter and will ban Brits if the tests start to rise.

According to newspaper Protothema the mass testing will be used to decide if Brits can still go to Greece, with the paper saying: “If the number and percentage of those found to be positive is low, and is limited to less than 30 to 40 cases then […] the British tourist market will remain open.”

The paper went on to say that the government ‘won’t hesitate’ to close its borders again as the risk of the virus spreading throughout the country outweighs ‘any benefits to tourism in a year that is considered largely lost’.

Last month, officials in Greece said they were cutting the Value Added Tax (VAT) and Goods and Services Tax (GST) on all modes of transport from 24 percent to 13 percent, in a bid to encourage visitors to travel around.

Speaking in May, Greek Prime Minister Kyriakos Mitsotakis said: “The tourism period begins on 15 June, when seasonal hotels can reopen. Let us make this summer the epilogue of the [Covid-19] crisis.

“We will win the economy war just as we won the health battle.”

While Greek Tourism Minister Harry Theoharis added: “We are opening up, but at the same time we are closely monitoring the situation. Strict health protocols will protect both staff and tourists.

“Our aim is to be able to welcome every tourist who has overcome their fear and has the ability to travel to our country.”