Coronavirus: More passengers for Changi and SIA, but much lower than in 2019 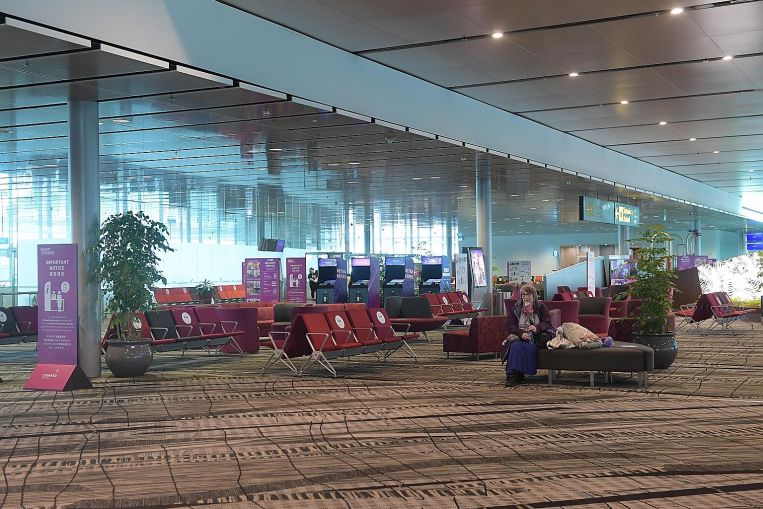 The opening of the Singapore-China green lane and the restarting of transit flights helped to boost passenger movements at Changi Airport last month, but only barely.

The number – 48,200 – is still 99.2 per cent below what it was in the same period last year, data released by Changi Airport Group (CAG) showed yesterday.

The numbers reflect the challenges ahead for the local aviation sector as it grapples with the impact of the Covid-19 pandemic.

CAG told The Straits Times that it has handled more than 10,000 transit passenger movements since the gradual reopening to transit flights on June 2, “though these still remain at very low levels compared to pre-Covid-19”.

Currently, only flights by the SIA Group – comprising SIA, SilkAir and Scoot – from selected cities are allowed to transit at Changi.

CAG said it is handling about 300 scheduled passenger flights per week this month, compared with around 170 per week in April, the first month after the ban on short-term visitors to Singapore kicked in.

SIA told The Straits Times that the pandemic continues to have a severe impact on international air travel.

“Progress towards a global lifting of border controls and travel restrictions, which could facilitate or result in the easier movement of travellers between countries, is slower than earlier expected,” said SIA.

As a result, about 140 of the SIA Group’s total fleet of about 200 planes remain grounded.

While still a tiny percentage of what they were previously, flights operated by SIA, SilkAir and Scoot have also been gradually increasing after hitting rock bottom in April.

On what its key plans are in the near future, SIA reiterated a point it made previously about an ongoing review of its operations by a task force.

“This task force is looking into every aspect of our operations, ensuring that the company is ready to step up and be ready when the recovery comes,” said SIA.

Meanwhile, budget carrier Jetstar Asia has suspended the majority of its flights until the end of this month, with the exception of some flights to Bangkok, Manila and Kuala Lumpur.

It will remove five Airbus A320 aircraft from its fleet of 18 planes and cut 180 jobs in line with the reduced fleet. The majority of its workforce are on furlough until at least the end of the year.

SIA, Scoot and Jetstar have also deployed staff to external roles such as transport ambassadors.

Scoot said more than 620 flight crew members are currently on secondary employment. Jetstar Asia said more than 300 of its staff are now in roles to prevent further spread of Covid-19.

“Everybody knew it was going to be a very long and tough recovery for Singapore because there is no domestic market, but right now the slow pace in reopening the international market across Asia is making the outlook for the rest of the year even bleaker than expected a few months ago,” he added.

Mr Sobie pointed out that the reopening to transit traffic has not had a significant impact due to weak overall demand for international air travel and new restrictions by Australia and New Zealand limiting repatriating traffic.

Aviation analyst Shukor Yusof of Endau Analytics said: “Singapore from the outset has been pragmatic and understood it will take a while before normality resumes, and the sector has reacted accordingly.”

Previous articleLive in Rajarhat, Access the Best of New Town, Kolkata
Next articleRARE India To Host Virtual Event For Travel Trade On July 23