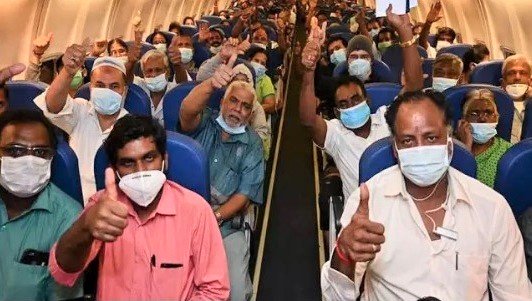 Since the onset of the COVID-19 coronavirus, hundreds of thousands of Indians have been stranded in various locations around the globe due to geographical lockdowns. As of a few days ago, under India’s Vande Bharat Mission, Air India has repatriated many of those long-stranded citizens. The Chairman and Managing Director of Air India, Rajiv Bansal, confirmed this saying, “As on July 13, Air India and Air India Express operated 1,103 flights, bringing back 208,000 Indians under the Vande Bharat Mission.”

This is also major victory for India travel agents and members of the Travel Agents Association of India (TAAI) and other associations who have been urging Air India and the Ministry of Civil Aviation of the Government of India (MoCA) to allow the booking of flights. Tourism, as in most countries around the world, has been suffering since the lockdown occurred.

The Vande Bharat Mission has been unfolding in stages with flights to the USA, Germany (Frankfurt Airport), and France (Charles de Gaulle Airport) being allowed in the coming phase. Similarly, other airlines like United Airlines, Emirates, Lufthansa, and Air France have also commenced bookings due to the opening of the air bubble between India, France, Germany, and the USA.

The Ministry of Civil Aviation on Thursday announced that they would be starting bilateral air bubbles between India and the US, Germany, France, and the UAE, said Ministry of External Affairs (MEA) Spokesperson Anurag Srivastava.

This will allow airlines of both sides to carry passengers to each other under defined conditions, he said. Some of these air bubbles have been finalized, while others are under negotiation, he added, saying “This would help movement of people between these countries and India till international air travel is restored to normalcy.”

The ministry is in regular contact with India’s missions and posts abroad to monitor the demand of repatriation of stranded Indians and for arranging Vande Bharat Mission flights as required, Srivastava said, adding that it was doing this in discussion with the Ministry of Civil Aviation.