Construction of country’s first ever heliport at Ashkona begins 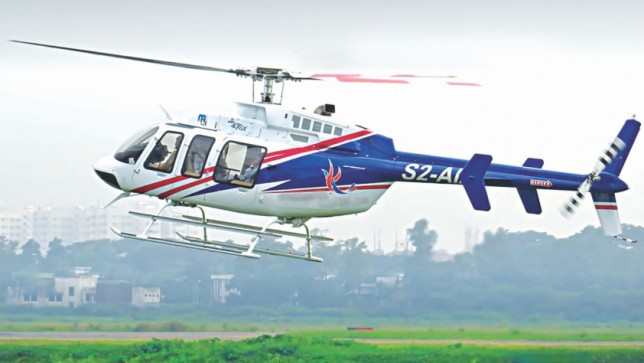 Many discussions are going on at present about the operation of helicopters. We cannot know at present from where helicopters are flying from and going to,” he told The Daily Star after a virtual discussion titled “Tourism: a penalty shoot for the economy of Bangladesh”.

The discussion was jointly organised by Bangladesh Parjatan Corporation, Ministry of Civil Aviation and Tourism and Travel Magazine-Bhraman.

Talking to our correspondent after the meeting over telephone, the senior secretary said, after construction of the helicopter terminal, we will be able to know who are riding on the helicopters as people who will enter and exit the terminal will be checked.

Besides, movement of ailing passengers through air-lifting will be eased due to a separate heliport, he also said.

Speaking at the discussion as chief guest, Mohibul Haque said: “As per the instructions of Prime Minister Sheikh Hasina, we have started work to build the country’s first ever heliport.”

The country’s private helicopter service activities at present are dominated by a few large business groups.

Around 14 to 15 companies are now operating helicopters in the country, Mohibul Haque, said.

The senior secretary said work is underway to formulate a policy for the development of tourism in Bangladesh.

This policy will specify the responsibilities of each ministry involved in tourism so that they can play a role in the development of tourism in Bangladesh by performing their part properly.

He said a joint initiative of all government and non-government organisations is necessary for the development of tourism.

“It is not possible to achieve the desired progress of tourism without integrated initiatives,” he also said.

Mahibul Haque said work is underway to include the issue of assisting tourists in the day-to-day work of the deputy commissioners to ensure the development of tourism and the convenience of tourists.