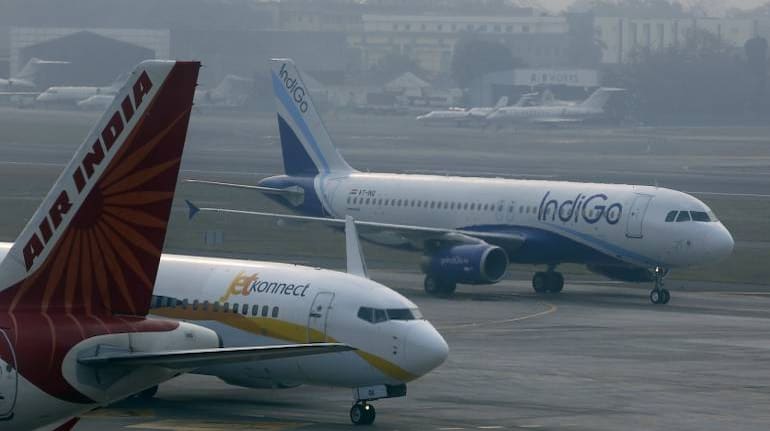 Budget carrier IndiGo is expected to report a loss of Rs 2,670 crore for the June 2020 quarter, while its rival SpiceJet‘s losses during the quarter are likely to be at around Rs 1,000 crore, owing to operational disruptions and low fixed cost coverage, a report said on Wednesday.

Regular operations of the domestic airlines remained shut between March 25 and May 24 on account of a nationwide lockdown to curb the spread of the coronavirus pandemic.X

The government allowed partial (one-third capacity) resumption of domestic commercial passenger flight services from May 25. The international operations, which were suspended from March 22, will however, remain grounded till at least July 31.

However, both IndiGo and SpiceJet along with some other carriers, including state-owned Air India, continued with cargo operations under the government’s LifeLine Udan scheme.

“We expect a net loss of Rs 26.7 billion for IndiGo and Rs 10.1 billion for SpiceJet in Q1FY21 driven by low traffic volume, low fleet utilisation and poor coverage of fixed costs,” brokerage firm Centrum Broking said in the report.

“Our estimates factor anticipated rationalisation in employee costs (factor 30-35 per cent down year-on-year) and other overheads,” it added.

An airline’s fixed costs comprise maintenance cost of grounded fleet, repayment of bank loans, aircraft lease rentals and staff wages, among others. The fixed costs account for 35-40 per cent of the total cost.

Immediately after suspension of airlines operations in March, most of the carriers announced cost-cutting measures, including salary cuts and leave without pay to employees.

According to the Centrum report, with closing US dollar-rupee exchange rates in the June 2020 quarter remaining almost flat against the March quarter of the financial year 2019-20, it expects a relatively small MTM (mark-to-market) foreign exchange loss of Rs 53.80 crore and Rs33 crore for IndiGo and SpiceJet, respectively.

Noting that the airlines are in liquidity conservation mode and slashing costs aggressively, the report said IndiGo is working on several cost reduction initiatives to improve liquidity. The measures include 5-25 per cent pay cuts for employees, deferment of salary increments and leave without pay for May-July, it said.

Reduction in discretionary expenses and capital expenditure (capex) deferral along with negotiation with suppliers and lessors for better terms including freezing of supplementary rentals, prioritising flying Neos to lower operating costs and suspending dividends to conserve liquidity, among others, Centrum Broking said in the report.

IndiGo estimates that these measures would help it generate additional liquidity of Rs 3,000-4,000 crore by December, it said.

Both IndiGo and SpiceJet are looking to accelerate retirement of their older narrow body fleet in order to rationalise their capacity in the wake of demand disruption as well as to lower fuel burn and maintenance costs, the report stated.

IndiGo targets to retire its CEO (current engine option) fleet of 120 aircrafts over next two years with flexibility of early retirements in mutual agreement with lessors, the report said, adding that IndiGo will also continue taking deliveries of Neos in the first half of the current financial year (it took delivery of nine A320/A321 Neos in April and May).

IndiGo’s robust balance sheet and competitive cost structure is best placed among Indian carriers to withstand the current disruption and also be in a position to capitalise on growth recovery, the report noted.

SpiceJet is also looking to retire its fleet of NG aircraft (especially 30 aircrafts taken from Jet Airways), according to the report.

The capacity caps are driven largely by constraints imposed by states on flight movements, the report said, adding that the average daily departures have grown from 478 in the first week (of resumption of services) to 759 in the sixth week (ending July 4). In terms of pre-COVID-19 domestic departures of around 3,000 per day, this implies about 25 per cent capacity deployment so far.

Also, the average daily pax has risen from 36,600 in the first week to 67,600 in the sixth week, as compared to about 4,10,000 passengers per day before the emergence of the coronavirus pandemic, it said.

The implied load factor stood at 49.5 per cent in the sixth week of resumption of services from 43 per cent in the first week, it added. Currently, there is no clarity on restart of international flight operation.

Centrum Broking, however, said weak loads and ancillary incomes are expected to impact yield even as lower aviation turbine fuel (ATF) prices will provide some relief, stating that “while we build in 5 per cent y-o-y expansion in ticket yields for IndiGo and SpiceJet in Q1FY21, rask (revenue per available seat kilometre) however should remain severely impacted (down 12-18 per cent Y-o-Y) due to lower load factors and near absence of ancillary incomes”.SpiceJet’s cargo business should remain relatively robust due to freighter operations and on-seat cargo operations during lockdown (20,200 million tonnes of cargo in freighter operations), it said.

Previous articleUAE’s newest airline to begin service on July 14
Next articleWhat are the restricted baggage items on Qatar Airways’ flights?