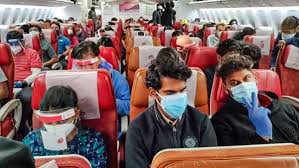 India suspended all the domestic and international flight services in the last week of March. The domestic flights have started operations in limited routes after a gap of two months in May. The domestic airlines have ferried close to two million passengers since then, a senior government official earlier said.

The international passenger flight services in the country will resume in a phased manner during ‘Unlock 2.0‘, the ministry of home affairs said on Monday. “International air travel of passengers has been permitted in a limited manner under the Vande Bharat mission. Further opening up will take place in a calibrated manner,” the central government said in a statement.

To bring back the stranded Indians from across the world, the central government started Vande Bharat Mission on May 7. Air India and several other private domestic airlines have been operating flights under this repatriation mission. Over 4.75 lakh Indians have returned to India from abroad since it has started, the ministry of external affairs said on Thursday.

“As on July 1, against a total number of 5,83,109 people who registered their requests with our missions abroad for repatriation to India, over 4,75,000 have returned under this mission,” ministry of external affairs Anurag Srivastava said.

Under the fourth phase of the mission, Air India will send 114 flights to 17 countries across the world. These countries are Canada, the US, the UK, Kenya, Sri Lanka, Philippines, Kyrgyzstan, Saudi Arabia, Bangladesh, Thailand, South Africa, Russia, Australia, Myanmar, Japan, Ukraine and Vietnam.