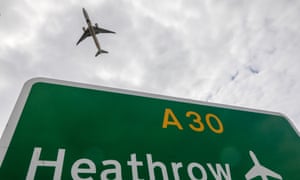 Overseas holidays and visits to up to 90 countries will be possible for Britons from Monday without the need to quarantine for 14 days on return.

The Foreign Office is expected to lift its ban on non-essential travel to nearly all EU countries, British territories such as Bermuda and Gibraltar, and Australia and New Zealand.

Turkey, a popular holiday destination, is also expected to be included in the list.Quick guide

Will there be a second wave of coronavirus?

The announcement, confirmed by government officials and due on Friday, puts an end to the air-bridge or travel corridor policy that has been pursued by the transport secretary, Grant Shapps, for several weeks.

This would have involved setting up reciprocal arrangements with a core of Mediterranean countries including France, Greece and Spain to not quarantine each other’s citizens.

Since 8 June, nearly all passengers have been required to go into self-isolation for 14 days at a declared address when they arrive in the UK. People who fail to comply can be fined £1,000 in England.

But as officials confirmed the number of countries to be included on the list, the Westminster blamed the Scottish government for holding up a final announcement.

Guardian Today: the headlines, the analysis, the debate – sent direct to you

Shapps, said that the devolved administrations needed to “get on board” so they could get the policy announced.

The Scottish first minister, Nicola Sturgeon, said Scotland had not been adequately consulted and that the UK’s position had changed three times in the past 24 hours.

Shapps told Scottish National party MPs in Westminster that they needed to lean on Sturgeon to change her mind.Advertisement

Responding to the SNP’s transport spokesman, Gavin Newlands, he said: “I’m very keen to get the devolved administrations, including Scotland’s government, on board so we can get this thing announced.”

He told Dr Philippa Whitford, the SNP MP for Central Ayrshire: “There is something the honourable member may be pleased that she can do, which is to ask the Scottish government to join with us in ensuring we have these air bridges in place nationwide as soon as possible.”

All of the countries due to be included in the new travel list are likely to be on the government’s green list of low-risk nations for coronavirus, or from the amber list, which is medium risk.

The difficulty travellers may now face is the individual circumstances of countries they want to visit, such as those that have suspended flights from the UK, or closed their borders entirely.

Coronavirus world map: which countries have the most Covid-19 cases and deaths?

While Britons may be free to travel to Australia and New Zealand, both of those countries have currently closed their borders to almost all visitors.