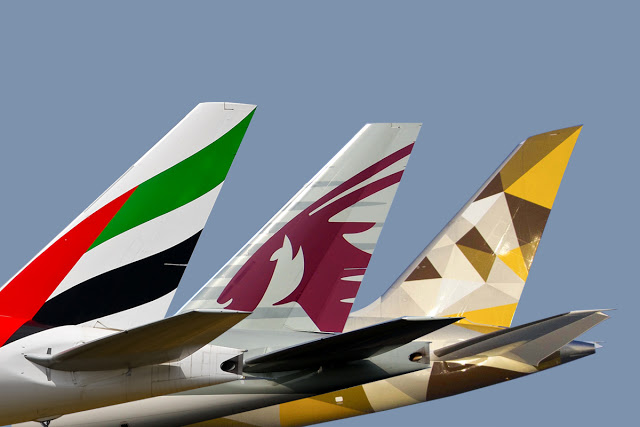 Airlines from the Gulf region have, as of today, started progressively reintroducing flights to cities in the former Yugoslavia following a three-month hiatus. All will maintain operations with a reduced schedule and face significantly decreased demand. Carriers from the Gulf region rely heavily on transfer passengers from Australia on their flights to cities in the former Yugoslavia, however, Australian residents and citizens are banned from leaving the country until at least September, other than for essential business, which requires special state approval. The measure is expected to be extended until the end of the year.
Qatar Airways has today reintroduced operations from Doha to Belgrade and Zagreb. The carrier will maintain three weekly operations to each city with its Airbus A320 aircraft, with exception to flights to the Serbian capital during the first week which will see A321 equipment. Services to Belgrade will be increased to four weekly from July 27. Entry into to Doha is not permitted for foreign citizens and non-residents, with the measure expected to last until September, however, transferring through Doha Airport is permitted. Passengers will notice minimal changes to their on board experience with Qatar Airways, with menus, meals, beverages, blankets, pillows and amenity kits all still being provided. The greatest point of difference will be cabin crew attire, which includes a full hazmat suite, gloves, masks and protective eyewear. At this point, Qatar Airways does not plan to resume services to Sarajevo and Skopje until the start of the 2020/2021 winter season, however, changes remain possible. Furthermore, seasonal services to Dubrovnik, which were to launch this summer but were then rescheduled for next year, have been removed.

Flydubai will restore services to Belgrade on July 4 and operate three times per week, each Thursday, Saturday and Sunday. Operations to Sarajevo will restart on July 8 and run three times per week, each Wednesday, Friday and Saturday. Its seasonal flights to Dubrovnik will be restored on July 16 with two weekly rotations, each Thursday and Sunday. At this point, seasonal services to Tivat have been cancelled, while flights to Skopje have been suspended until the start of the 2020/2021 winter season. The carrier is expected to gradually increase frequencies from August. Entry into Dubai for foreigners will be permitted from July 7 with a negative PCR test. Transfer through Dubai Airport is allowed without testing requirements. Emirates, which serves Zagreb, plans to resume seasonal flights to the Croatian capital on September 1 with four weekly operations from Dubai.

Etihad Airways will restore services between Abu Dhabi and Belgrade from July 18, initially with a two weekly rotation. Foreigners are still denied entry into the Emirate of Abu Dhabi, however, transfer is permitted through the airport. Sharjah-based Air Arabia intends on resuming seasonal services to Sarajevo from July 16, although its schedule has not been finalised yet. Saudi Arabia’s Flynas has suspended its operations from Riyadh to Sarajevo for the rest of the summer. It previously shelved plans to launch a new service from Qassim to Bosnia and Herzegovina’s capital and cancelled operations between Jeddah and Sarajevo.