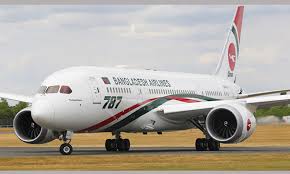 Biman Bangladesh Airlines, a state-owned airline, has earned Tk 234 crore in three months by operating special and cargo flights, even though passenger flights were closed due to corona conditions. However, the maintenance cost of the aircraft in a month is Tk 28 crore. However, even though the aviation sector of the whole world is wrapped up in Corona, the people concerned are seeing the light of hope as the aircraft has made a small income.

According to reports, all routes of the aircraft were closed at the end of March due to corona virus. After that, the aviation authorities thought of alternative income. In the three months from January to March after the onset of the corona outbreak, the average number of air passengers dropped by 39.6 per cent. In early April it came down to absolutely zero.

However, from mid-April, the airline started going on the path of income. Since then, the state-owned airline has been operating chartered flights. Biman started bringing back the stranded Bangladeshis from different countries of the world. Initially it brought passengers from India, then from the Middle East, Europe, Japan. It also operates multiple chartered flights from Dhaka to Italy, England, Portugal and Spain. The company also started transporting goods on various routes including the United Kingdom.

According to Biman, Biman operated more than 109 chartered and cargo flights in the three months from April to June 29. It has earned Tk 234 crore from these flights. Of this, Biman earned Rs 40 crore in April, Rs 94 crore in May and Rs 100 crore till June 25.

The revenue may increase in July, said the senior secretary of the Ministry of Civil Aviation and Tourism. Mahibul Haque. He said the revenue from chartered and cargo flights in three months was Tk 234 crore. We are now looking for a different way of earning.