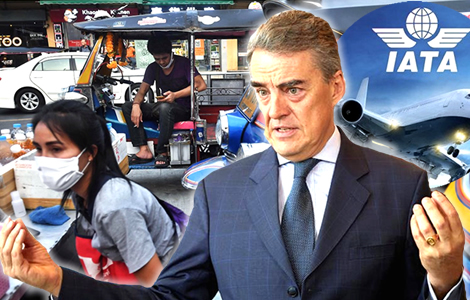 The airline industry body representing over 290 airlines calls for a global standard and response to kickstart international travel between countries as Thailand faces a ฿2 trillion loss of income. The latest poll, however, still shows the Thai public cautious but now a majority want to see tourism resume within 6 months.

The Director-General of IATA, the nucleus of the world’s airline industry, has warned that governments worldwide, drifting towards national quarantine schemes, could be giving the green light to rising unemployment in the tourism industry. It has proposed an alternative, global solution. It comes as Thailand stands to lose ฿2 trillion in lost income this year with rising levels of unemployment even as it emerges from its Covid 19 victory to confront the economic devastation brought on by the shutdown which continues to impact the economy.

The Director-General and Chief Executive Officer of airline industry body IATA, the International Air Transport Association, has warned that an increasing trend among world governments to institutionalise quarantine may have startling adverse consequences for the global travel and tourism industry.

It comes as Thailand’s government on Monday appeared to be focusing on allowing entry to the kingdom on a case by case basis through a commercial quarantine scheme devised as a scalable alternative to Thai state quarantine which is only available to Thai nationals.

Alexandre de Juniac said that an opinion poll conducted among would-be travellers worldwide showed that 83% would not even consider travelling to a foreign country while facing the prospect of enforced quarantine.

Thailand is facing a loss of ฿2.2 trillion in tourist income, based in increasingly dire projections for foreign arrivals into the kingdom as the coronavirus emergency continues.

This would be based on achieving 8 million visitors this year of which 6.7 million had already arrived before the close of Thailand’s airways came into effect on April 4th.

These figures were brought into relief when Tourism Minister, Phiphat Ratchakitprakarn, earlier in June, urged caution at projecting tourism figures for 2020.

The figures are in line with a projection by Siam Commercial Bank’s economic analysis unit which has predicted an 81% fall in visitors and a 73% contraction in income from foreign tourism for the year.

This week, the IATA Director-General urged governments worldwide to pull back from compulsory quarantine.

‘Safely restarting the economy is a priority. That includes travel and tourism. Quarantine measures may play a role in keeping people safe, but they will also keep many unemployed,’ Mr de Juniac pointed out.

Thailand’s incoming passenger ban saw the country’s incoming visitors fall off by 97% for May after a 99.3% reduction in April.

The IATA boss said that with quarantine requirements, most countries could look forward to a 90% drop off.

The concern among many travel industry and business analysts is that this prolonged hiatus could result in a permanent closure of capacity and efficiency within the tourism and hospitality industry.

Last week, the CEO of Thai Air Asia, Nadda Buranasiri, while advocating a Pan Asean tourism bubble offered to visit each foreign embassy in Bangkok to bring plans together to kick start international air travel which has been left paralysed by this shutdown.

It came on the week that Thai Singaporean airline and joint venture, Nok Scoot, announced its closure and liquidation leaving 450 staff, many of them in Thailand out of jobs for good.

Call for a global approach

This week, Mr de Juniac called for a worldwide approach working through IATA which represents 290 of the large airline carriers worldwide and before this crisis, 82% of the world’s passenger traffic.

He outlined a new regime where ill passengers would be screened and prevented from travelling.

In addition to non-invasive temperature checks, he called for rapid testing and results delivered at airports of departure for all passengers travelling from ‘high risk’ countries.

Easy, accurate and quick testing at airports of departure worldwide called for by IATA boss

The airline industry boss said that, if it was well organised, such testing could be achieved efficiently without long waits or congestion building up at airports. He also stressed that the accuracy of such tests must be high.

One of the contributing factors to the world shutdown over this pandemic was initial confusion caused by false test kits and shoddy testing.

This has now dramatically improved with highly efficient and more accurate testing based on new technology developed by firms such as pharmaceutical giant Roche which developed a new serology test at the end of April.

On arrival at destination airports, Mr de Juniac called for the use of apps such as that used by Thai authorities before the closure of the country using information technology to track and monitor visitors.

Mr de Juniac emphasised that this approach would have to be a global one and called for the adoption of guidelines laid down by the International Civil Aviation Organisation (ICAO) which include face mask requirements, sanitisation and declarations of health.

It also includes social distancing but this raises a question about the economic viability of flying in such conditions.

Some weeks ago, a Suan Dusit Poll in Thailand showed a massive 76% of people opposed to an immediate reopening of Thailand for tourism while a combined 82% estimated it would take one year for tourism and access to Thailand to return to normal.

A new survey, this week, conducted by YouGov among the Thai public with paid for respondents shows that that opposition to reopening the kingdom to tourism may be softening somewhat although there appears to be firm resistance and caution which supports the stance being taken by the Thai government at this time.

37% are now opposed to opening the borders under any time frame while 63% would approve it based on a wait of between 3 months to a year.