International flights remain suspended till July 15, but govt may allow some planes on select routes 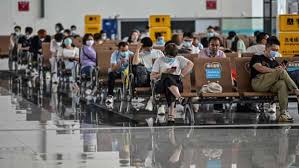 In the wake of coronavirus outbreak, the civil aviation regulator Directorate General of Civil Aviation (DGCA) today has decided to suspend all international flight operations in the country till July 15. “The competent authority has decided that scheduled international commercial passenger services to or from India shall remain suspended till 2359 hrs IST of July 15, 2020,” said the DGCA circular.

India suspended all the flight operations in the last week of March to curb the COVID-19 spread. After a gap of two months, the domestic flight operations resumed on May 25 following the stringent measures. The domestic airlines have ferried close to two million passengers since then, a senior government official said.

To accelerate domestic passenger traffic growth, the Centre has decided to allow flights to more destinations, the civil aviation minister Hardeep Singh Puri earlier said. . At present, the airlines are only allowed to deploy 33% of their total capacity.

To bring back the stranded Indians from across the world the Central government started Vande Bharat Mission on May 6. Air India and several other private domestic airlines have been operating flights under Vande Bharat Mission. Nearly 1,25,000 Indians have returned from different countries, the civil aviation minister said.

In a relief for airlines, Supreme Court today clarified that that there is no need to keep middle seat vacant. The apex court upheld the Bombay High Court order that had permitted all flight operators to allow passengers to occupy middle seats in flights. However, the airlines should strictly comply with guidelines of aviation regulator on measures to prevent the spread of COVID-19.

The DGCA in its May 31 circular said flight operators should try to keep the middle seat vacant. If it has been booked, then the passenger shall be provided with a wraparound gown in addition to the mask and face shield, the regulator added.