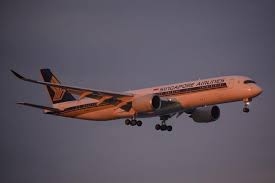 THE coronavirus outbreak is unexpectedly providing an opportunity to Singapore Airlines to grab a share of the lucrative Indian market held by rivals Emirates Airline and Etihad Airways through a local affiliate.

Vistara, which Singapore Airlines jointly owns with Indian conglomerate Tata Group, is about to get its second Boeing 787 Dreamliner jet, and expects demand for long-haul international travel from India to rise when travel restrictions lift, chief commercial officer Vinod Kannan said in an interview. While the outbreak has delayed expansion plans for the airline, people will prefer direct flights as demand returns toward the end of the year, he said.

“There will be an increase in the number of people who want to travel direct, say, from India to Europe, because they don’t want to transit through another hub that increases travel time, that increases exposure”, Mr Kannan said this week. “There’s actually a silver lining for us” both in terms of business travellers and people flying to visit their friends and relatives, he said.

The advantage for Singapore Airlines will come from the fact that India doesn’t allow foreign airlines to directly fly passengers to a third country. That’s where its local affiliate will step in, providing non-stop connections overseas and luring passengers away from Emirates and Etihad. The success of Vistara is crucial for Singapore Airlines — which just raised about US$6.2 billion by selling shares and convertible bonds — as it needs more connections to its sprawling network in absence of a domestic market.