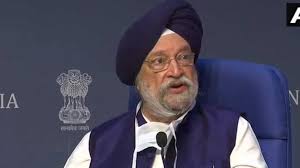 India resuming international flights will depend on other countries being open to receive flights, Union civil aviation minister Hardeep Singh Puri said on Saturday. At the same time, he was hopeful of resuming domestic flights to full capacity by year end.

“Any suggestion that international air traffic has opened up and we are the only ones not to open up needs a reality check. The exact time when we will resume international flights depends on other countries to be open to receive flights,” he said.

India has suspended international passenger flights since March 22, in a bid to contain the spread of Covid- 19.

The minister said that international flights operations depend on airspaces being open and a border acceptance from other countries. “Many countries decided that they were not going to allow nationals from other countries except their own. We also went with the same position,” Puri said.

Giving details the minister said, entry is conditional in the US, UK, France, China, UAE and Singapore. “You cannot have normal civil aviation operations under such conditions,” he added.

The minister added that in the absence of a decision on resumption of international flights, India is left with no option but to continue “evacuation and repatriation” flights under managed and controlled conditions.

He was referring to the government’s initiative in bringing back Indians struck abroad due to Covid-19 pandemic. The Centre had launched the Vande Bharat Mission for this purpose on May 6.

The aviation minister said that during the phase 3 and phase 4 of the mission, private domestic airlines have been approved to operate 750 international flights to repatriate people stranded amid the coronavirus pandemic.

The government was constantly trying to expand both domestic and Vande Bharat flights, the minister said, adding that the domestic flight ops would be ramped up.

“At present we have allowed only 33% flights to operate and flights are not operating in full capacity even now. We will open more routes where there is more demand. We are ready to take it to up to even 40-45% capacity, Puri added.

Previous articlePhysicists, engineers, biologists and citizen scientists are devising new technologies and tests so we can globetrot again.
Next articleREGISTRATION OPEN FOR DHAKA – ATHENS EVACUATION FLIGHT