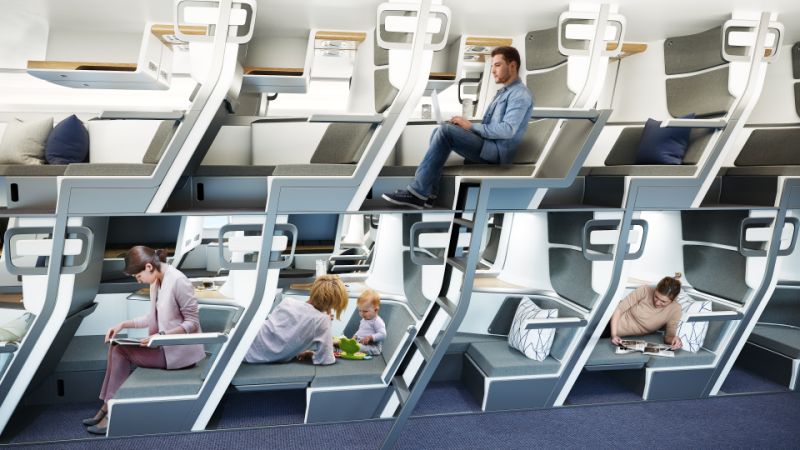 Being able to lie completely flat on a plane is the travelling dream, but until now it is reserved for those able to fly business class.

But a new design by a start-up company has created a double-decker style cabin featuring two tiers of seats, which would mean every passenger could have a lie-flat seat.

Zephyr Aerospace initially came up with the plans to give passengers more space, but the concept would also allow travellers more isolation, which could give travellers more confidence in flying following the coronavirus crisis.

Photographs of the bunk bed-style plans reveal that passengers could sit above and below each other in rows, accessing the top level by pulling out a cleverly concealed staircase.

The seats would be built in rows of 2-4-2 across the cabin, so airlines wouldn’t have to reduce the number of passengers on each plane.

Instead of passengers squeezed in together sitting upright, the nifty prototype utilises the empty space between the cabin seats and the overhead cabin, and as both tiers of seats recline, it means passengers could get more snooze time on long-haul flights.

It was during a long-haul flight to Singapore that designer Jeffrey O’Neill first came up with the genius idea.

“I’m on probably the best rated airline in the world, and I’m getting wonderful service and the food is edible, but I can’t sleep,” he told CNN.

“[It was] really uncomfortable. Why is it so difficult to find an affordable way to lie flat on a flight that’s 19 hours?”

Mr O’Neill had the light-bulb moment after remembering a long-distance bus journey he’d made where the bus contained bunk beds and he slept far better. It occurred to him that planes could utilise a similar design.

“We basically retrofitted a whole other seat on top of another, so it’s essentially two levels.

“It’s not as tall off the ground as people might imagine, it’s only four and a half feet off the ground from the entry point to the lower seat to the upper seat.”

Although the new seating concept is still in still in its infancy, it’s good to know that we might soon have a viable solution to returning to travelling by air to far-flung places.

And what’s not to love about flying with more legroom, extra privacy and the opportunity to lie flat? 0:10 7:13   What to Expect When Flying Now (and in the Future)