Why Is Emirates First Class So Expensive? 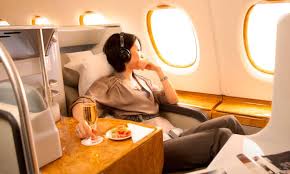 Vistara, also known as TATA SIA Airlines Limited, is an Indian full-service carrier based in Gurgaon. The airline is a joint venture between Tata Sons and Singapore Airlines and was founded in 2013. It commenced operations on January 9, 2015, and has a strong base at Delhi’s Indira Gandhi International Airport. Since then, the airline has gradually expanded its route network and fleet. By June 2016, Vistara had carried more than two million passengers. As of 2019, the airline has a small 4.7% market share in the domestic carrier market.

Last year was a very happening year in the history of the Indian airline industry. The number of passengers carried and the number of flights operated was at its all-time peak. Until the demise of Jet Airways, India’s largest full-service carrier (FSC) at that time, everything looked good. Since early April, when Jet Airways ceased operations, the Indian airline industry has taken its gradual steps to recovery. After a sudden drop in the number of flights, the airlines were not able to cater to the high passenger demand. As a result, prices increased, and passenger numbers fell.t

However, the presence of low-cost carriers (LCC) like IndiGo made sure that the industry didn’t for long. By the end of 2019, the vacuum in slot availability was filled up, mostly by IndiGo, SpiceJet and Air India. But, the void left by Jet Airways in the international market will take years to recover.

As far as the Indian airline industry is concerned, the success of an FSC will always remain a question. After the demise of Kingfisher Airlines in 2012 and Jet Airways in 2019, Vistara and Air India are the only remaining FSCs in India.

Most Passengers Are Leaving New Flight Bookings Until The Last Minute

For a very price-sensitive market like India, LCCs are the preferred choice for most of the passengers. However, the presence of premium carriers like Vistara in an LCC dominated market is undoubtedly an attractive option. With its opulent service and an alluring appeal, the airline has set its foot in India as one of the most loved airlines. However, Vistara’s presence, as of now, is very restricted to a few major routes and upper class customers. Its expansion will hence be pretty dependent on the cost-conscious passengers in India and their inclination towards experiencing premium services.

As of today, Vistara serves 34 destinations with a fleet of 40 Airbus A320, B737, and B787 aircraft. Initially, the airline had planned to operate an all-Airbus fleet of A320-200 and A320neo jets. However, the airline leased nine B737s of Jet Airways in a bid to expand its operations further. Two of these aircraft have already left the fleet, and others would exit by 2022.

Earlier this year, the airline took delivery of its first B787-9, becoming the first Indian airline to operate the type. Currently, the 787 is being flown on the Delhi-Mumbai sector to complete its flight hours. Later it will be introduced in international sectors like London or Tokyo.