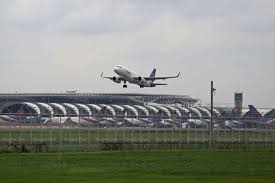 The Civil Aviation Authority of Thailand will begin talks on the resumption of international services with airline representatives on Tuesday, director-general Chula Sukmanop said on Monday.

Priority would be given to business trips, with tourists from paired “travel bubble” countries being allowed in later.

Mr Chula said he had called in all airlines that operate international flights for discussions on measures to be implemented by the CAAT, the Public Health Ministry and the International Civil Aviation Organisation to prevent the spread of Covid-19 disease.[X] Close

The measures included social distancing on planes and at airports, guidelines for inflight food services and quarantine areas aboard airplanes, he said.

Mr Chula said that international flights would first resume to serve people who had to supervise businesses in Thailand or overseas. They would have to be prepared for quarantine and possible medical treatment costs, he said.

The CAAT director-general said he did not expect the travel bubbles for foreign tourists proposal would be ready for implementation next month.

There were many elements still to be considered, including the Covid-19 situation in other countries and the feasibility of providing particular flight routes, Mr Chula said.