Thai Airways pushes back resumption of international services to August 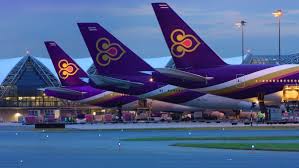 Thai Airways, with more problems than most airlines at the moment, has pushed back its resumption of international services from the start of July to August. Maybe the flight schedulers know something the rest of us don’t….?

The Civil Aviation Authority of Thailand has pushed back the resumption of international flights twice already. The current ban will finish on June 30. But there has been no official update on what will happen after June. Now Thai Airways is adjusting its planned flight resumption for flights to Europe out of Bangkok, changing the launch dates for its London and Paris services. Published in Airlineroute, the planned London and Paris services of Thai Airways are now due to resume in August rather than previously reported in July.The national airlines’ Bangkok – London Heathrow service will be reintroduced on August 1 with a daily Boeing 777-300 in service. According to the earlier scheduling, the airline was planning a service starting 16 July, three times a week. On the Bangkok-Paris route, the airline has now postponed the launch from 17 July to 1 August offering three weekly flights.

The scheduling, or the re-arrangements of the scheduling, are happening while the national carrier is going through major restructuring in the country’s Bankruptcy Court. The airline, burdened by growing debt, was already struggling before the financial crisis brought about by Covid-19 lockdowns and border closures. Its fleet has been grounded with only a few aircraft used for special repatriation flights.

Meanwhile there are ongoing discussions about creating “travel bubbles” or “green lanes” between countries with low infection rates that governments consider as ‘low risk’. This would allow essential travel to resume without quarantine requirements. Malaysia, Vietnam, Taiwan, South Korea and China have already been talking about possible limited resumptions of flights between the ‘low risk’ nations.

Globally, over 65 million jobs are supported in the aviation industry with 1 in 10 jobs around the world provided by the tourism sector. Most of those jobs are now at critical risk, in the short to medium term, and only a complete reopening will allow thousands of SMEs that rely entirely on tourism a chance to survive.

Thailand has a high reliance on tourism and the government will be weighing up the risks between an extended pause on its tourism economy and opening up too early to ‘at risk’ countries that are still struggling with Covid-19 cases. As Thailand continues to repatriate its citizens, the only new cases of Covid-19 in the past 2 weeks have been from citizens returning from overseas – mostly from Middle East countries as well as the US.

Previous articleLicense of bus drivers who fail to follow health guidelines will be revoked : NTC
Next articleEco-Tourism Society gets a new name, Rakesh Mathur as its incoming president.