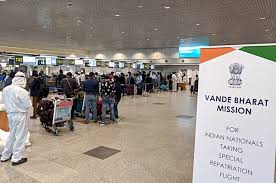 Air India on Friday opened bookings for around 300 flights to various countries including the USA and the UK under phase-3 of the Vande Bharat Mission that resulted in “overwhelming” demand from travellers as the national carrier got six crore hits on its website during the first two hours of opening the bookings.

Many travellers vented their ire on social media, stating that Air India’s website did not function properly during the first few hours of opening when most of the flights got sold out.

The national carrier opened its bookings at 5 PM and it posted the following on Twitter at 6.08 PM on Friday: “Demand for seats from India on flights planned under Mission Vande Bharat-3 is overwhelming. Sectors/ Flights are being opened in a systematic manner for booking, on the website.”

In response, a passenger named Vicky Ravi tweeted, “I’ve been trying to book flights for the last one hour, ur website crashed. Please kindly help me with the booking”.

Another passenger named Mandeep Kaur said the website is “very slow and the system is crashing”.

Many other passengers had similar complains about the overwhelmed booking system of the national carrier.

Air India will operate around 300 flights to Europe, Australia, Canada, the USA, the UK and Africa between June 10 and July 1 during phase 3 of Vande Bharat Mission.

The national carrier posted at 8.20 PM on Friday on Twitter: “Bookings for select destinations in USA,Canada,UK & Europe etc under Phase3 of #MissionVandeBharat opened at 5pm today. Around 60 million hits received till 7pm on our website & 1700 seats sold through the website alone in 2 hrs. Bookings continue & tickets are being issued.”

In response, a passenger named Sarath Medasani said on Twitter: “What is the use @airindiain when your website is taking 10 mins from page to page navigation. This is not 2G time, the world is evolving using technologies but you guys are still stuck at olden times.(sic)”

Another passenger named Navaneet Kumar responded: “Can you also project the number of misses? As people are getting frustrated of @airindiain service? What will you do with 60M hits if your system can process only 1700 requests in 2 hr window? “

Under the Vande Bharat Mission, Air India and its subsidiary Air India Express started operating international flights from May 7 onwards to repatriate stranded Indians from abroad. The first phase was from May 7 to May 16, following which the second phase began.

Between May 7 and June 1, Air India group has operated a total 423 inbound international flights under the mission, bringing 58,867 Indian citizens back to the country

Previous articleCovid-19: A ‘very good idea’ to wear masks on flights – expert
Next articleBiman cancels all flights till Monday due to lack of passengers