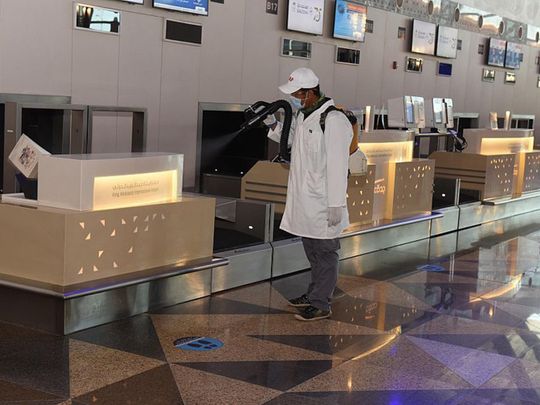 Domestic air travel Sunday resumed in Saudi Arabia amid tight health precautions as the country is moving towards return to normal life.

The first flight by the national carrier, Saudia, took off from the King Abdul Aziz International Airport in Jeddah in western Saudi Arabia heading to the capital Riyadh, Saudi newspaper Okaz reported.

Transport Minister Saleh Al Jasser had toured the airport and inspected preparations at the facility ahead of the restart of flights, according to the report.

In March, Saudi Arabia suspended air travel as part of a string of measures aimed to curb the spread of the novel coronavirus.

Last week, the kingdom eased some related restrictions according to a phased plan to restore normal life.

The General Authority of Civil Aviation (GACA) has announced a set of preventive measures coming into effect for air travellers beginning Sunday. They include barring passengers whose temperatures exceed 38° C from entering airports.

Other measures oblige travellers to use electronic tickets, wear face masks, and show up at least two hours before scheduled flights. Only passengers are permitted into airports, with one escort allowed for each of the elderly and physically challenged travellers, according to GACA.

As part of the precautions against the coronavirus, temperatures of the staff and passengers will be checked.

Social distancing rules at airports and aboard aircraft will be strictly enforced. Passengers will board the plane in groups to avoid physical proximity.