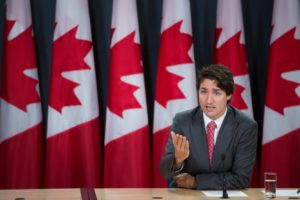 Prime Minister Justin Trudeau has stated that Canada is exploring easing travel restrictions that currently prevent some individuals from crossing the U.S. border to enter Canada to reunite with their family.

Trudeau made the remarks during his daily coronavirus briefing to the Canadian public on Friday May 29.

The Canada-U.S. border was first closed to non-essential travel effective Saturday March 20th by mutual agreement as both countries sought to reduce the spread of COVID-19.

The travel restrictions were initially put in place for 30 days, but have since been extended on two occasions, including most recently on May 20th.

Among those exempt from the travel restrictions include essential workers, and immediate family members of Canadian citizens and permanent residents, as long as said family members are travelling to Canada for non-discretionary purposes.

Canada Border Services Agency (CBSA) has been provided guidelines on how to define non-discretionary travel.

CBSA is turning away immediate family from entering Canada if it deems the purpose of the trip to be non-essential.

During his remarks, Trudeau recognized the challenging nature of the restrictions for families and said he was hoping to seek a resolution.

However, he noted that easing travel restrictions is cause for concern among Canada’s provinces, who he has been consulting with on this matter.

In fact, Trudeau noted that this issue was brought up as recently as the evening of Thursday May 28 when he spoke with provincial premiers.

According to the Prime Minister, some premiers expressed openness to easing travel rules for families on grounds of compassion, while other premiers felt that doing so could make efforts to contain COVID-19 more challenging.

Trudeau concluded by saying that the federal and provincial governments will continue to explore this topic while keeping the safety and security of Canadians at the forefront of the ultimate decision that is taken.

Canada has had special immigration, visa, and travel measures in place since the middle of March.