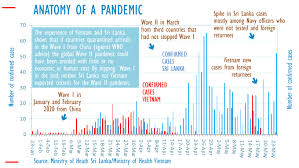 Sri Lanka is relaxing daytime Coronavirus curfews country-wide from May 26 though travel curbs to Colombo and Gampaha will remain amid strong progress made against the spread of the Covid-19 with officials advising the public to maintain distance.

On May 25 Sri Lanka’s Health Ministry saidthe total count went up by another 41 to 1182 by 1900 hours.
Recent increases were mostly from foreign arrivals.

One person who had returned from Kuwait had died taking the total to 10.

Curfew is being relaxed after no new cases have been found from the community outside of Navy personnel in lockdown and foreign returnees for around 24 days.

Two days of nation-wide curfew ends at 0500hours on May 26, curfew will be imposed only from 2200hours to 0400hours until further notice. But travel curbs will remain to the Gampaha and Colombo districts.

Inter-district buses will also be permitted from May 26 but they will have to stop on the borders of Colombo and Gampaha.

However expressway buses would be allowed to come to Kottawa inside Colombo with state workers and essential workers Amaraweera said.

Buses have been asked only to take persons according to seats and everyone should wear a mask.

Trains will also operate to Colombo for state workers and essential workers with reserved seats. Minister Amaraweera said there were about 25,000 seats but about 125,000 persons usually travelled which showed the magnitude of the problem.

Officials are saying that people should be cautions while rules are relaxed.

“We are not saying the country is 100 percent normal from tomorrow,” the head of Sri Lanka’s Health Service Anil Jasinghe told the media.

“We will be able to completely open in the future. But even then we have to follow three rules; respiratory etiquette, hand hygiene and social distance.”

Sri Lanka has released a series of guidelines for all industries and activities including weddings.

Factories are expected to work with one metre gaps between workers which will reduce the number of persons.

While infections from a Navy camp are going down, new infections are coming from arrivals from Kuwait and other countries under a program where stranded Sri Lankans and guest workers are being repatriated.

Sri Lanka reported 52 new Covid-19 infections on May 24, mostly returnees from Kuwait. Sri Lanka is expected to slow down repatriations to help

Sri Lanka is expected to slow down repatriations to help health authorities cope with new infections.

Sri Lanka has made strong progress in containing the spread of Coronavirus and has been aggressively contact tracing and is only behind only a few countries such Vietnam, which appears to be the global leader in containing Covid-19.

Sri Lanka completely killed Wave I infections from China with one tourist found and all other Chinese workers quarantined and did not export any domestic citizens to contribute to the global pandemic.

Sri Lanka closed the border to third countries on March 19 and is battling clusters coming from infected persons that arrived in the country from the around the second week of March where two clusters grew big due to testing denial of tests to asymptomatic persons.

A surge in infections came from a Navy camp at a time when tests were denied to frontline workers. The rules have since been relaxed.

A denial of tests to high risk groups have also been relaxed and selected community testing is being done and the contact tracers no longer dependent only on symptomatic persons turning up in hospital.

Sri Lankan authorities were earlier saying there were no infections in the community while doing no community tests.

But the discovery of a large cluster in Bandaranaike Pura in the capital Colombo as well as the Navy camp led to a relaxation of testing controls.

Colombo in particular is considered risky due to high population density with the Bandaranaike Pura and Keselwatte areas seeing a large cluster developing while the capital was under a strict curfew.

In Bandaranaike Pura, a cluster spread first in a densely populated area where 230 persons in 62 families were living in an 18 perch land.

There was close interactions between the area and also nearby areas.

Tests have also been carried out in nearby areas Princess Lane, Abdul Hammed Road and Quarry Road to see if infections had spread.

“Colombo North, Colombo Central, is where most of the labour and workers in the city live,” Wijayamuni told the media.

“Many industries, offices and ministries and private firms are in Borella, Colombo West and Colombo East.

Sri Lanka saw a sudden explosion of cases from late April and May after a Navy camp was found infected.

Due to lack of a strategy to test high risk groups at the time the cluster was found only after a symptomatic sailor admitted himself to a hospital halfway across the country after hitching rides of food trucks.

Hundreds of sailors had gone on leave when inter-district travel was banned for others, sometimes put on trucks by service personnel manning checkpoints.

They were all recalled and their family members also swiftly quarantined.

Sailors continued to turn up infected for some weeks after the first infected person was found.

Samitha Ginige, a senior epidemiologist at the Ministry of Health told the media that there were persons at various stages of infection in the camp.

“Some people who are getting better,” he said. “There are some who were active. Some with pre-symptoms. Some do not have symptoms.”

“Some people are asking why cannot do tests on the whole camp? But if we do it one day, more will come the next day (pahuweni dawaseth enawar).

“We are doing it according to a system.”

In the camp there were sailors engaged in various duties which made the issue more complicated, Ginige said.

An observer who is familiar with the strategies used in Vietnam said the entire camp would have been tested immediately and infected persons plucked out in the first round of testing.

Vietnam had tested entire street blocks and villages in this manner when even a single infected person was found, to keep down infections in this manner and avoided locking down the country in full.

Previous articleFirms can file delayed VAT returns for March and April by June 9 without penalty: NBR
Next articleLong lines and huge wait time, the new face of air travel