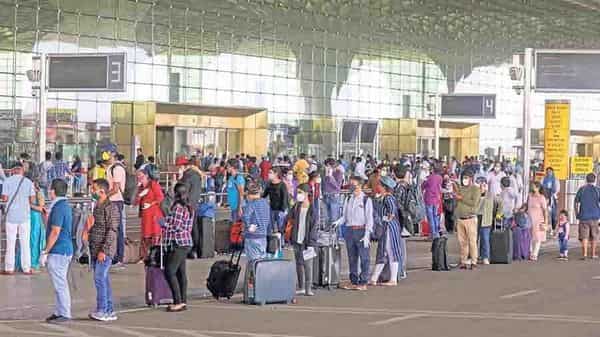 For the first time in his life, Wasim Khan was not with his family in Dhanbad for Eid. He was to leave Delhi on Monday via Air India’s 7am flight to Ranchi, but at 3am, a masked man at the airport main gate told him flight AI 0417 had been cancelled.

“No texts. No emails. No explanation. Some people had come from Meerut for this flight,” said Khan, angry and tired. “This is utter madness.”

Chaos, confusion and long queues greeted passengers as flights resumed after a two-month air travel ban to stem the spread of the coronavirus. Still, thousands of passengers flew on Monday to check on elderly parents, go home from a city they had been stranded in, or to deal with family emergencies.

Many like Khan were, however, let down as airlines cancelled flights at the last minute, highlighting the lack of preparation.

In a surprise announcement on 20 May, civil aviation minister Hardeep Singh Puri said domestic flights would restart, giving airlines and airports about four days to come up with a comprehensive plan to ensure smooth and safe flights. Since then, states have issued their own directives that often contradict the Centre’s plan — Andhra and West Bengal have extended flight bans, while Assam and Karnataka require arriving passengers to undergo a two-week quarantine.

Mumbai-based Rohan Talukdar, his mother and younger brother were prepared for a 14-day isolation in a Guwahati hotel near their home. But 30 minutes before leaving home at midnight for their 5am Indigo flight on 25 May, Talukdar received a text that their flight had been cancelled. “My granddad died a week ago. We are supposed to be home during this mourning period, but again, we are stuck.” He booked another flight for 26 May which was 18 hours long with stopovers. At 5pm, he received a text saying that too had been cancelled. “That’s over ₹30,000 blocked with IndiGo. I have no idea if I will get it back,” said Talukdar.

Previous articleReady to take-off! Air Canada to operate flights to 97 destinations this summer
Next articleNo home quarantine for asymptomatic passengers arriving in Delhi