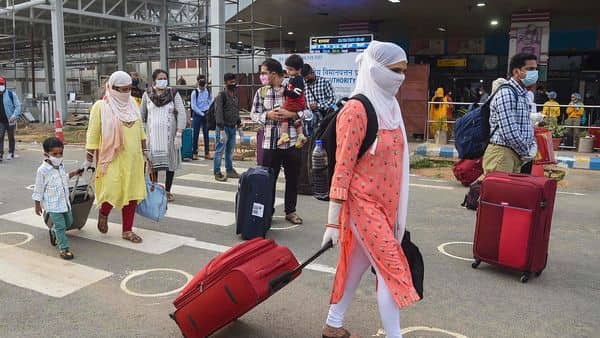 The dream to make it big pushes not just the poor but even the rich from the comfort and cosiness of home to the grind of big cities. This for many means staying away from families for long stretches of time and that’s okay under normal circumstances, but not during a pandemic.

So when the 60-day long lockdown was relaxed and the government decided to allow flights to operate, many queued up to go back home. Among them was Shreya Jain, 25, who runs a disability community platform in Mumbai. Living by herself in the city, Jain was itching to return to her folks so when the flight schedule for 25 May opened up, she booked two tickets to Chandigarh immediately. “This lockdown has taken a toll on everyone and my father runs a business and could do with some help. I want to be there for support them, but I also have to ensure I don’t end up being the carrier so I bought two tickets for physical distancing on the flight,” she said.

Manvi Ghildiyal, 29, an IT professional in Pune who is on a sabbatical is another urban migrant who along with her husband and friends booked flight tickets to go back home to Dehradun. But for Ghildiyal like Jain, the flight experience started a day early as the passengers flying out from Maharashtra spent many uncertain moments since the state was resisting resuming flight operation till the very end. “We went through all the emotions on Sunday — from excitement to nervousness of catching the virus to uncertainty of flight operations. There was no way we could sleep and we had an early morning flight to catch. Further, the airport rules are clear that not more than two passengers are allowed per vehicle and since there are no online cabs, we had to book a local taxi that charged us double the amount,” she said.

Once at the airport, temperature checks didn’t come as a surprise. “Our bags were getting sanitized at the security check before you enter the airport and we had to undergo temperature checks. The guard at the gate was also verifying if we had downloaded Aarogya Setu app and the status was safe. But what caused discomfort was the poor coordination between what the rule book said and ground realities,” said Ghildiyal. “We booked directly from the website and it didn’t mandate us to take print outs, only PNR and flight details were to be written on paper and stuck to bags but at the airport we were asked to show our print outs to the cops standing behind the glass window. Fortunately the airport was giving free print outs,” she added.

Jain who flew from Mumbai’s international airport to Chandigarh also didn’t carry a print out and so she had to use the kiosks for her boarding pass. “Half the kiosks didn’t seem to work, and there was a lot of confusion before we were finally allowed to proceed towards the ticket counter to get our boarding passes,”she said. But for Jain the biggest pain point was the wait. “There were thermal checks right outside the airport in the taxi lanes, but there was a huge crowd at the security gate. Some people were taken aside but I think that has more to do with the fact that they hadn’t downloaded Aarogya Setu on their phones,” she said.

For Jain reaching more than 2 hours early for her flight wasn’t good enough as she nearly missed the flight by a whisker. “At the line to the ticket counter, the staff was pushing senior citizens and people with children first. So by the time my turn came which was nearly after 40-50 minutes, they informed me that the gate had closed. I had to fight myself in and was finally allowed to rush for security check,” she said.