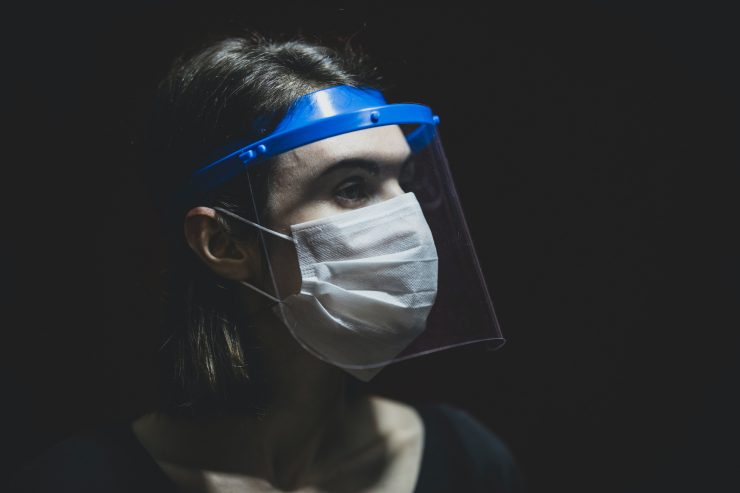 American Airlines has told its flight attendants they are not permitted to wear plastic face shields to protect themselves against the novel Coronavirus, the Dallas Fort Worth-based airline confirmed on Tuesday. The updated guidance, which cites FAA regulations, follows a controversial incident in which an American Airlines flight attendant was threatened with disciplinary action for wearing her own face shield during several domestic flights last week.

Boston-based flight attendant Dede Marie wrote about her experience of wearing a face shield on duty which resulted in a spat with base leaders. Marie claims a crew manager told her the visor “makes customers uncomfortable” and that if she felt unsafe she should take a leave of absence instead of wearing her own Personal Protection Equipment (PPE).

In a public Facebook post, she said she would continue to wear a face shield in spite of what she described as harassment from her managers, although American is adamant that they aren’t permitted and aren’t likely to be permitted anytime soon either.

A similar incident occurred in March when another Boston-based crew member wore her own surgical face mask on a domestic flight. At the time, American only permitted flight attendants to wear face masks on select international flights to Asia but quickly reversed its policy after a backlash from its own staff and travelling members of the public.

Since then, American has followed the lead of the likes of jetBlue and United by making the wearing of face masks mandatory for both crew and passengers alike as a protective measure against COVID-19. It has even been revealed that American plans to make reusable face masks for flight attendants to wear while at work in the same material as its new uniform.

The Centers for Disease Control and Prevention (CDC) recommends the use of non-medical face masks or coverings for members of the public to protect themselves from COVID-19 but official guidance doesn’t yet support the use of face shields. There are, however, growing calls to get Americans to wear face shields in public settings.

In the Journal of the American Medical Association, Dr Eli Perencevich of the University of Iowa for one claims face shields “should be included as part of strategies to safely and significantly reduce transmission in the community setting.”

Although there are few studies that back the effectiveness of face shield usage by members of the public, Dr Eli argues that they “may provide a better option” than a normal surgical mask in protecting against the Coronavirus.

“In a simulation study, face shields were shown to reduce immediate viral exposure by 96% when worn by a simulated health care worker within 18 inches of a cough,” the team noted in their research paper.

Physician and epidemiologist Michael Edmond has also backed calls to get Americans wearing face shields. Not only could they provide better protection than face masks but they are also more comfortable and prevent the wearer from touching their face. They are also reusable, easily cleaned, and enable lip reading and easier reading of facial expressions.

But face shield advocates will first need to convince the Federal Aviation Administration (FAA) before you see a U.S.-based flight attendant wearing one. In the memo sent by American to its in-flight crew last week, the airline noted:

“The FAA has not approved them (face shields) for regular use onboard our aircraft, and the CDC does not recommend them. It’s possible these large face shields could pose a safety hazard, making it more difficult for crew members to respond to an emergency.”

“Since the FAA hasn’t approved their use, no other US carriers permit flight attendants to wear face shields during regular flight operations,” the memo continued. “That being said, if CDC recommendations evolve (just like they did on face masks), we will work with other airlines to ask the FAA to modify its policy. It would require revisions to multiple policies including: donning oxygen masks, performing CPR, evacuation/ditching, Heimlich and firefighting/PBE.”

In recent weeks, we’ve seen more and more airlines require their flight attendants to wear face masks and face shields as part of their COVID-19 protective response measures. Indian low-cost airline Indigo is even handing out branded face shields to every single passenger.

Meanwhile, two prominent Persian Gulf airlines, Emirates and Qatar Airways require their crew to wear perspex glasses. Similar PPE has been introduced at a number of Asian carriers including Cathay Pacific. If this could be a possible workaround for AA flight attendants, the airline wasn’t giving anything away with a spokesperson responding that such an accessory would first need to be approved by the FAA.

Previous articleLong lines and huge wait time, the new face of air travel
Next articleQuarantine-Free Flights From Australia Could Start Within Weeks