The private jet version of the Boeing 787 can cost more than $200 million and fly over 18 hours. Take a look at some its most luxurious designs. 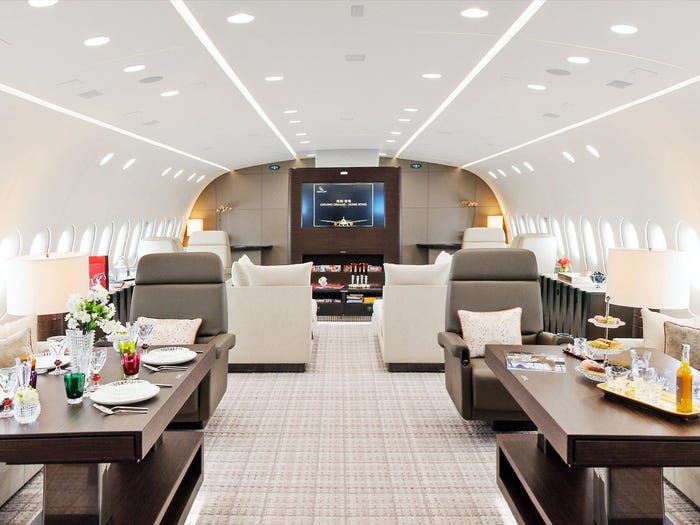 The 787 Dreamliner is one of Boeing’s most popular twin-engine wide-bodies thanks to its fuel efficiency, lower operating costs, and passenger-friendly amenities, which have proven to be endearing qualities for airlines and private owners alike.

As with all of its bestsellers, the manufacturer also offers the aircraft as part of its Boeing Business Jet line-up, which caters to the ultra-elite that require airliner-sized private jets when they travel. Unlike its wide-body siblings, however, the 787 Dreamliner can make its flyers feel good about taking to the skies in a flying mansion thanks to fuel-efficient engines and aerodynamically-friendly features that lower overall fuel consumption.

With a $200+ million price tag, the business jet variant of the Dreamliner can currently be found flying in the fleets of high-end charter operators, national governments, and billionaires with cash to spare. The government of Mexico currently has a 787 in its fleet, valued at around $130 million, that it is currently trying to sell as part of a government spending reform initiative under President Andrés Manuel López Obrador.

In the airline world, the Dreamliner can typically hold upwards of 200 passengers, depending on configuration, which leaves a lot of room to work with when a private owner decides to purchase the plane. Among the three Dreamliner variants on offer, the average space available is around 2,500 square feet.

Take a look at some of the designs that firms have dreamt up just for the Dreamliner.

Previous articleAn epidemiologist and an exposure scientist explain: how to stay safe when flying
Next articleHong Kong to allow transit flights from June 1