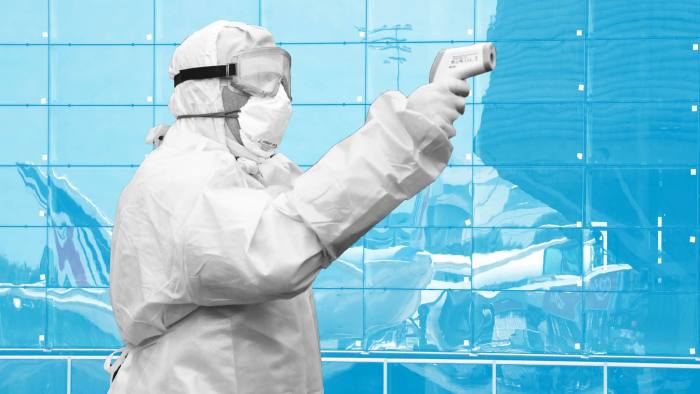 Tina is standing in Paris Charles de Gaulle airport with her one-and-a-half year old daughter, on her way home to Kinshasa from London. “The flight was full, no seats between us and other people,” said the 30-year-old. “They didn’t take our temperature and that worried me.”

But that will soon change because ADP, which runs Charles de Gaulle, put in place temperature checks this month to scan passengers as the aviation industry rushes to restore confidence in travellers and restart a sector that has been decimated by the pandemic.

The airport shows the physical signs of what has quickly become a new normal. Social distance markers divide floor space in front of check-in desks, seats in departure lounges carry stickers warning people to sit apart, Perspex protects staff as they assign seats, and at every entrance masks and gels await those braving air travel.

“Just like after 9/11, travellers needed assurance that there are no weapons on-board. Now they will need to be reassured by airlines and airports that there are no viruses on board,” said Shashank Nigam, chief executive of SimpliFlying, an aviation consultancy.

Most carriers and airports insist on face masks for passengers and staff, as well as provide hand sanitisers and conduct deeper cabin cleaning. The industry has been keen to reassure passengers that air travel is safe.

Boeing’s Jim Haas, director of product marketing, says the air on board is “virus free” thanks to Hepa filters on all modern aircraft. These filter air to the quality of a hospital operating theatre.

Some airports such as Hong Kong have gone one stage further with Covid-19 tests for arrivals. In future, immunity passports could be included as temporary biosecurity measures.

“Your health certificate is going to be as important as your visa,” said Andrew Charlton, an aviation consultant.

Flights will look different: some airlines will offer no food, or at best pre-packaged items, and magazines have been removed. Ryanair’s customers will be banned from queueing for the toilet. Some carriers, such as Air France, have also introduced temperature checks before flights.

It comes as many airlines are hoping for a recovery to start in July, bringing to an end a three-month shutdown that has left carriers with virtually no revenues and tens of thousands of job cuts.

“In my lifetime I haven’t seen this . . . But at the times we went through the global financial crisis, gulf wars, the 1998 economic collapse in the east . . . at each of those times I thought ‘aw crikey this is going to be a bad one, what are we going to do?’ But we got through it and made money afterwards,” he said.

But the path to kick-start flying again already looks difficult.

The European Commission published a plan this month that envisages a co-ordinated gradual lifting of border restrictions, with countries and regions opening up safe corridors where epidemiological conditions allow.

However, both the UK and Spain have proposed 14-day quarantines on arriving travellers, a move that in effect shuts down international travel. Other countries, such as Australia and New Zealand, are setting up so-called safe-travel corridors between regions that have contained the virus. One has also been set up in the Baltics.

Many airline executives are worried. “It’s clear from everything we’ve seen, the period of recovery is going to take much longer than anything we’ve witnessed before,” Willie Walsh, chief executive of IAG, which owns BA, told analysts this month. “We hope going forward we’ll see a co-ordinated response but, to be honest, that’s more of a hope than an expectation.”

On top of the health measures, many carriers believe lower fares will stimulate demand. Jozsef Varadi, chief executive at Wizz Air, a low-cost airline, thinks demand is already there — the carrier started flying again to some locations from the start of May. Its planes are 70 to 75 per cent full. “It’s better than most people would have expected,” he said.

Mr Charlton said: “In the short term, we’re likely to see airlines flooding the market with cheap tickets to get people over their fears. But once we get over the sugar rush, I think it’s inevitable that prices will go up because there will be fewer airlines.” Airlines will also have large debts to repay and will need to shore up their balance sheets, according to analysts.

One issue that continues to perplex the industry is the potential enforcement by individual countries of social distancing at the airport and on board. Airlines were relieved this week when new guidelines on safe travel by the European Aviation Safety Agency stopped short of insisting that airlines ensure social distancing on board.

While many carriers have said they will try to ensure social distancing in the early months when aircraft are unlikely to be full, this has already caused problems for some airlines.

US carriers United and American Airlines have come under fire after passengers tweeted pictures of packed planes. United had emailed to say it would automatically block middle seats. It later admitted it could not guarantee passengers will be seated next to empty seats on all flights.