Flying during the pandemic? Here’s what you need to know

Passenger train services to begin from June 1: All you need to know 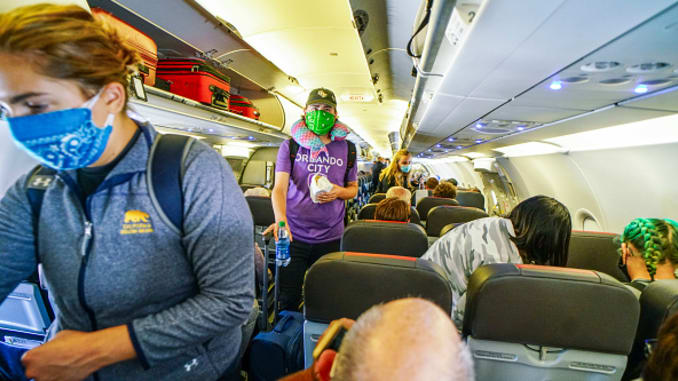 Airline passengers this summer will face a host of new policies and procedures, and possibly a few packed flights, because of the coronavirus pandemic.

Memorial Day kicks off what is normally the busiest season for airlines, when airports are bustling and flights are often sold out. An uptick is occurring again this year, but the impact of the virus continues to keep demand far from usual levels.

The Transportation Security Administration said 348,673 people passed through security checkpoints at U.S. airports on Friday. That’s the highest in just over two months and more than three times the number of people from a month ago, but down 88% compared with the same day last year.

Airlines have scrambled to adapt to the new environment. The plunge in demand sapped them of revenue. Losing money for the first time in years, U.S. airlines have idled thousands of planes and slashed flights, in some destinations by around 90% of the norm,  in a bid to reduce their cash burn. That means more connecting flights for many travelers used to the convenience of non-stops.

They have also implemented a number of new measures aimed at reducing contact between travelers, crews and other airport workers, an effort to ease concerns about the spread of Covid-19 during travel. Even aircraft manufacturer Boeing earlier this month announced a “Confident Travel” initiative to weigh new technology like ultraviolet light disinfecting systems that can help reduce the transmission of pathogens on board.

The TSA last week issued new guidelines for passenger screenings this spring and summer to limit contact between its officers and travelers.

For example, travelers will scan their own paper or electronic boarding passes instead of handing them to a TSA officer. TSA also asks travelers to put food they’re bringing along into a clear plastic bag and remove that from their carry-on bags, so officers don’t have to remove it from a passenger’s bag if it sets off an alarm in the X-ray scanner. Phones, keys and wallets should go right into carry-on bags to “reduce touch-points during the screening process.”

TSA officers are required to wear face masks on the job and the agency encourages travelers to do the same.

Airlines are also making some changes before travelers reach their seats to try to protect travelers and crews. United Airlines has started using sneeze guards at check-in counters and other customer service areas. It has started rolling out touchless kiosks to print bag tags using a smartphone at some airports and expects to put more of them at airports around the U.S. in the coming weeks.

One of the biggest challenges of the Covid-19 crisis for air travel is that the authority over traveler health screenings isn’t clear.

Frontier Airlines says it plans to start taking travelers’ temperatures starting June 1 but most airlines have said it is the responsibility of the government to perform health screenings. Airline workers’ labor unions and some lawmakers have pushed for federal mandates — not just guidelines — for health precautions in air travel

The Department of Homeland Security, which includes TSA and customs, is exploring temperature checks and thermal scanning at airports “to see what we can do to provide some layer of security,” acting Department of Homeland Security Chad Wolf told the Dallas Morning News during a trip to Texas on Thursday. While Wolf said such measures won’t eliminate risks entirely, it can help “make sure that folks perhaps with elevated temperatures, perhaps they’re at the beginning of feeling sick, we can identify those individuals and not have them fly. But … it’s certainly not going to be a panacea.”

The union that represents TSA screeners has bristled at the possibility of passenger health checks, such as Covid-19 testing at the airport, telling CNBC last month that such exams would be “far from their duties and responsibilities.”

Airlines say their on-board air filters are highly effective at removing pathogens and that they have stepped up cleaning of aircraft, disinfecting surfaces and using devices like foggers to disinfect cabins. Last week, United said it will work with Clorox and the Cleveland Clinic to determine the best guidelines to disinfect surfaces on aircraft and in the airport.

Masks are becoming the norm, a trend that could last for months before a vaccine or treatment for Covid-19 is determined. Major U.S. airlines this month have started requiring that not only crew members but travelers also wear masks on board. They’re encouraging them to wear them in common spaces like departure halls and gate areas as well, in light of federal recommendations about reducing the spread of the disease.

But airline crews won’t force travelers to wear the masks, CNBC reported last week. A plane isn’t likely to divert if a passenger doesn’t comply. For example, JetBlue Airways told crew members that they should alert their colleagues on arrival if a passenger refuses to wear a mask and told flight attendants to “use your best judgement to uphold our service standards in order to minimize disruptions.”

Social distancing is extremely difficult on board in normal circumstances, but planes are flying emptier. The number of passengers last month fell to the lowest levels since the 1950s, before the jet age, according to Airlines for America, a trade group that represents carriers including American, Delta, United, Southwest and others. A4A estimates 73% of U.S. flights are less than half full.

I guess @united is relaxing their social distancing policy these days? Every seat full on this 737

But the surprise of seeing the occasional packed plane has angered travelers who were expecting more social distancing on board. A tweet from a passenger on a crowded United flight from San Francisco to Newark earlier this month was shared thousands of times. It prompted United to introduce a new policy that informs travelers if their flight is more than 70% full, but spokesman Charlie Hobart said 85% of the airline’s flights are less than half full.

Delta, for its part, said it plans to add 100 flights next month and will keep planes no more than 60% full. American also said it limits capacity and on Friday, its flights were an average of two-thirds full, an internal document showed.

JetBlue says it will block middle seats on its Airbus planes, with the exception of parties traveling together, through at least July 6, while Southwest will also limit capacity on its flights through the middle of the summer.

“So you won’t see full flights on Southwest, at least through the end of July,” CEO Gary Kelly told investors last week. “And if we do have more demand for that flight, we’ll also add additional flights to meet that demand.”

There is no bulletproof method, however, experts have warned.