This is now the world’s busiest airport… on certain Saturdays 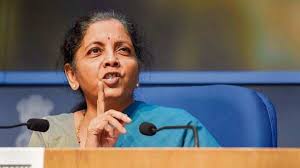 Finance Minister Nirmala Sitharaman on Saturday said banks have been asked to extend loans automatically to eligible borrowers without fear of 3Cs — CBI, CVC and CAG.

She said clear instructions have been given in a meeting with CEOs and MDs of public sector banks and financial institutions on Friday that the banks should not be scared to extend loans as 100 per cent guarantee is being given by the government.

In case of default, the individual bank or official will not be hauled up, she said in a conversation with BJP leader Nalin Kohli uploaded on the party’s social media platforms.

“Yesterday, I reiterated that by saying, if a decision goes wrong, and if there is a loss, the government has given 100 per cent guarantee now. It is not at all going to be on the individual official and on the bank, and therefore without fear they should take this automatic route in the sense, everybody eligible for additional term loan and additional working capital should be given,” she said.

As part of the ₹20.97 lakh crore comprehensive economic package, the government announced the Emergency Credit Line Guarantee Scheme (ECLGS) worth ₹3-lakh crore for the MSME sector, hit hard by the coronavirus crisis.

It is being said that the genuine bonafide decisions in the banking sector are being impacted because of the worry of undue harassment by 3Cs–Central Bureau of Investigation (CBI), Central Vigilance Commission (CVC) and Comptroller and Audit General (CAG).

The Finance Ministry has taken several steps to allay those fears including withdrawing some of the notifications which were causing fears among bankers, she said.

“…concerns these banks have had in their minds earlier, and may have even now are absolutely well founded. In fact, through my last 7-8 months, I have spent at least three different times with the banks to say that the fear of the 3Cs as they refer to the CBI, CVC, and also the CAG should not be in their minds,” she said.

When asked about criticism about leaving many critical sectors including hospitality, auto and civil aviation in the economic package, Sitharaman said the government has not taken a sectoral approach but a holistic approach.

“Except agriculture and the power sectors where reforms would be undertaken, other than that I have not come up with any sectoral reference. What has now become to be called as MSME package, it includes MSME, and also aims at touching others (sectors) too,..So the sectors that you are referring to can also benefit through this,” she said.

She expressed hope that from June 1, liquidity would start flowing from banks without any new collateral.

During the meeting with bankers, the Finance Minister said it was emphasised that the loans should be sanctioned in a simple manner and if possible digitally to avoid any physical contact.

This story has been published from a wire agency feed without modifications to the text. Only the headline has been changed.