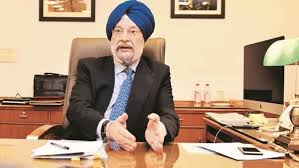 As the domestic flight operation resumes from Monday, Union civil aviation minister Hardeep Singh Puri said there will be no 14-day quarantine for passengers.

“The quarantine issue will be dealt with in a pragmatic manner. We can’t have 14 days quarantine. It is not practical,” the aviation minister said.

“In case you test positive, then you will not even be permitted to enter the airport or board flights,” Puri added while discussing the revised SOPs that flyers need to follow when flights start on May 25.

The Centre decided to start the domestic flight services from the next week after two months. India suspended the flight services in the last week of March when the nationwide lockdown was first imposed.

Only flyers with confirmed web check-in will be allowed to enter an airport terminal. The civil aviation ministry added that there will be no physical check-in at counters. Passengers must compulsorily walk through a thermal screening zone before entering the airport terminal building. Masks and gloves are mandatory for all.

Only the asymptomatic will be allowed to travel. All the flyers must install Aarogya Setu app on their phones except the children below the age of 14 years. If they do not show “green” on Aarogya Setu mobile app or do not have the government contact tracing app, they will not be allowed in. Only one check-in bag will be permitted and airlines will not provide any meal services in flights.

On Wednesday, Puri said domestic operations would be re-started in a “calibrated” manner. “There will be a lower and upper limit of fares prescribed by the government during coronavirus pandemic period,” the aviation ministry stated.