We will have summer tourist season, promises EU 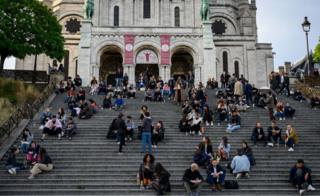 A gradual lifting of borders has been proposed by the EU’s executive in an attempt to kick-start a tourist industry hit hard by the coronavirus pandemic.

“Our message is we will have a tourist season this summer,” said economic affairs commissioner Paolo Gentiloni, “even if it’s with security measures and limitations.”

Borders closed across the EU, including the border-free Schengen zone.

But states are starting to reopen them.

Austria and Germany have become the latest EU countries to agree to remove travel restrictions.

From Friday there will be random checks at border crossings and then on 15 June free movement should resume. “We want to make people’s everyday lives easier and take another step towards more normality,” said Chancellor Sebastian Kurz.

UK travellers have already been warned not to expect “lavish” international holidays, with plans for a 14-day quarantine on air arrivals. But travel without quarantine will be possible to France.Image captionGermany introduced border controls on several of its neighbours when the outbreak began

The scale of the crisis was illustrated by travel giant Tui announcing the loss of up to 8,000 jobs worldwide with plans to cut costs by 30%. The German government has given the company a €1.8bn (£1.6bn; $1.9bn) bridging loan to stay afloat.

What is the EU planning?

The European Commission said its guidance was based on the principles of safety and non-discrimination. Tourism provided almost 10% of Europe’s economic output and millions of jobs across the 27 member states relied on it.

The non-binding plans involve countries working together to gradually remove travel bans and then border checks, while keeping targeted measures as the Covid-19 outbreak comes under control across the member states.

A phased approach would start by allowing seasonal workers across borders, followed by a lifting of restrictions between countries with the virus under a similar level control and then the opening of all the EU’s internal borders.

Don’t rush for the beach just yet

We’re not talking about jumping from lockdown to European beach party overnight.

Here in Belgium shops have only just re-opened, schools follow next week but with umpteen social distancing measures in place.

So what does that mean for holidaymakers? Ultimately each EU country will decide about its own borders and beaches but the advice from Brussels is: slowly, slowly – depending on infection rates.

First open up for goods and workers needed to keep economies going. Then for tourists and ONLY if destinations have Covid-19 testing and tracing measures in place – with tight controls on transport, accommodation and leisure activities.

“Workers and travellers need to know that hotels, restaurants and beaches are safe,” said Ms Vestager. She added that the various contact-tracing apps being worked on by European countries to monitor the spread of Covid-19 would have to work across Europe.

Refunds or vouchers for cancelled trips?

One of the big questions for European consumers is what will happen if their trips are cancelled.

Ms Vestager accepted that, while travel companies faced a cash crunch, “European consumers have the right to a cash refund if that’s what they want”. She said the crunch would be less severe if consumers agreed to take vouchers, so recommendations would be made on how to make that option more attractive.

“Of course this isn’t going to be a normal summer but when we all work together… then we don’t have to face a completely lost summer,” she told reporters.