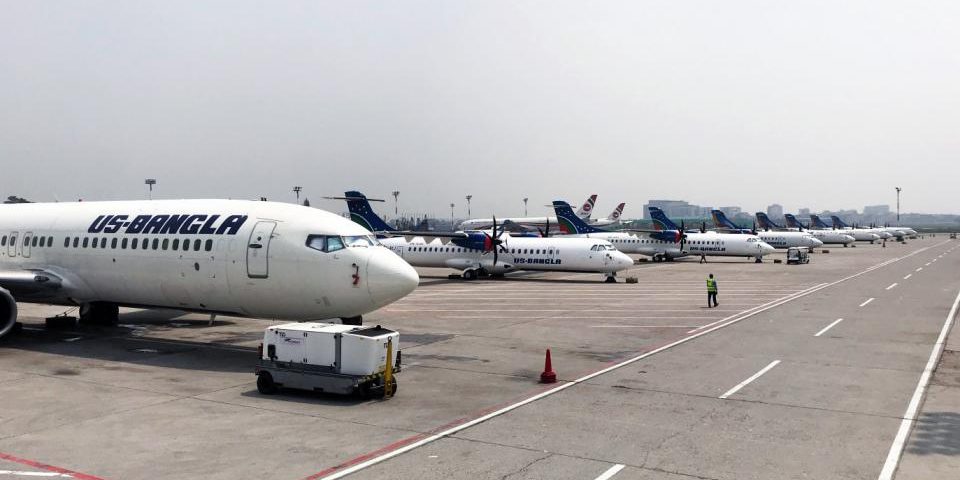 All aviation charges for both domestic and foreign carriers operating in Bangladesh have been waived by the Civil Aviation and Tourism Ministry in an attempt to support the struggling aviation industry in the wake of the coronavirus pandemic.

The decision came at a meeting between the ministry and the Civil Aviation Authority of Bangladesh (CAAB) held at the secretariat on May 12.

According to the decision, aeronautical charges for domestic flights have been fully waived until 2021 and 50 per cent for international flight operations until December this year.

Non-aeronautical charges have been completely waived for all until December, 2020.

The decision to waive these charges has been sent to the Ministry of Finance for final approval as there are VAT-related issues to be considered, said Md Mohibul Haque, Senior Secretary of Civil Aviation and Tourism Ministry.

The National Board of Revenue (NBR) collects 15 per cent value-added tax (VAT) on aeronautical charges.

The CAAB levies the charges for providing aeronautical services such as landing, parking, route navigation, boarding bridge and embarkation facilities to airlines for both international and domestic flights. Non-aeronautical charge includes outlets for operators in the airport.

An airline has to pay BDT 3,700 per domestic flight with a Dash-8 as aviation charges, CAAB said in a statement.

In case of international flights, aviation charges vary on the size of aircraft from minimum BDT 1.16 lac to BDT 5 lac per flight.

The CAAB earns around BDT 90 crore to BDT 100 crore per month from airlines from aviation charges, but in March, its revenue dropped to almost zero due to flight cancellations amid the coronavirus outbreak.

On this note, Md Mokabbir Hossain, Managing Director, Biman Bangladesh Airlines, said, “When airlines are going through such a severe financial crisis and also cutting jobs to minimise operational costs, this waiver will give them some relief.”

In March, Biman incurred losses of around BDT 400 crore. To bear the operational costs, the flag carrier received a BDT 1,000 crore loan from Sonali Bank under a stimulus package announced by the government.

On the other hand, the largest private carrier US-Bangla faced a loss of BDT 600 crore since March, mentioned Mohammed Abdullah Al Mamun, Managing Director of the airline.

The carrier has sought a loan from a private bank under the stimulus package to run operations, he added.

Another private carrier Regent Airlines has already suspended its operations for three months due to the financial crisis caused by COVID-19 outbreak.

Meanwhile, the International Air Transport Association (IATA) has projected that Bangladesh will see a 37 per cent fall in passenger traffic this year – the fourth highest in South Asia – losing 4.22 million passengers.