When flights start after lockdown, cabin baggage may not be allowed 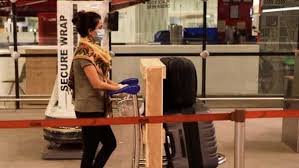 Filling up of a detailed questionnaire related to COVID-19, carrying no cabin baggage, using Aarogya Setu app and reaching airport at least two hours before a flight departure might well be among the requirements for air passengers during the initial phase after resumption of commercial flights.

The civil aviation ministry has come out with a draft Standard Operating Procedure (SOP) for restarting commercial air passenger services in the country, which remain suspended since March 25 in the wake of the lockdown to curb spreading of coronavirus infections.

Green status on Aarogya Setu app, web check-in, and temperature checks for all domestic departing and arriving passengers have also been proposed.

The draft SOP, accessed by PTI, has also mooted rostering the same set of cabin and cockpit crew as long as possible in order to prevent possible cross contamination.

Not just for passengers, the draft SOP has suggested measures that could be followed by security agencies as well as airport operators, including doing away with identity card checks at airport entry gates and ensuring social distancing requirements.

Another suggestion is to keep three rows of an aircraft vacant for isolating any passenger who has a medical emergency onboard.

The draft SOP was prepared after discussions with stakeholders, including airlines and airport operators. Comments have been sought from the stakeholders on it, according to sources.

Notably, the draft document is silent on leaving the middle seat of the aircraft vacant for maintaining social distancing. Aviation regulator DGCA had made a suggestion about leaving middle seat vacant, prior to suspension of commercial flight services in March.

“A questionnaire to be circulated to the passenger and filled up by them in advance about their past history related to COVID-19 and quarantine, if any, in last one month.

“Any passenger who has undergone quarantine in the last one month to be sent for security at the isolated security check unit only,” as per the document.

According to the document, passengers should be advised to familiarise themselves about the new procedures at the airport, especially about social distancing norms and ensuring minimum touching of various surfaces.

They should also be familiar with baggage limitations, COVID-19 questionnaire, need to register on Aarogya Setu app, possibly slower processes at airports and use of authorised taxis to reach airport, it said.

The ministry has proposed that passengers should reach the airport at least two hours before a flight and do away with passenger identity checks at airport entry gates to minimise rush at the entry points.

Passengers can do web check–in and carrying cabin baggage should not be allowed in the initial phase of operations, as per the document.

Further, the ministry has suggested that passengers denied travel due to high temperature or age should be permitted to change their date of travel without penalty and airlines would have to maintain their records.

Airports should have an isolation zone in the terminal building as well as the airside for passengers showing symptoms and state governments should provide requisite help with medical infrastructure in case an airport does not have an APHO (Airport Health Organisation) set-up, it noted.

Airports would have to put in place distance markings, disinfecting all common areas like lifts, escalators, chairs in seating areas, food and beverages, and retail outlets. Availability of moveable hand wash cart or alcohol-based hand sanitisers within the terminal should be ensured, the ministry has proposed.