No cabin luggage, those over 80 not allowed in the draft SOP for domestic flights 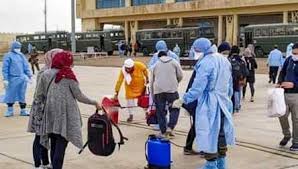 Cabin luggage will be barred and passengers aged above 80 years not allowed on flights when air passengers services, suspended since March 25 because of the Covid-19 lockdown, resume in the country, according to guidelines drafted by the government for the first phase of the restart of commercial flights.

The draft standard operating procedures (SOPs) proposed by the civil aviation ministry for passengers, airlines and airport operators at a meeting on Monday have done away with the rule of keeping the middle seats vacant in compliance with social distancing norms. Passenger ID checks will also be not required so as to minimise the crowd at terminal gates.

Stakeholders in the aviation business,including airlines and airport operators, have been asked to review the draft, a copy of which has been reviewed by Hindustan Times, and submit their feedback by the weekend.

The rules make it compulsory for all passengers to arrive at the airport only after completing their web check-in at home. The reporting time for travellers at the airport is proposed to be increased by two hours. Only passengers whose flights are scheduled to depart in the next six hours will be allowed inside the airports.

Cabin luggage will be disallowed, and only one piece of check-in baggage weighing less than 20kg will be allowed per passenger in the first phase of resumed airline operations.Those aged above 80 will not be allowed on flights. According to the draft SOPs, passengers stopped from boarding a flight because of age or if they are found to be running a high temperature will be permitted to change their travel date without any penalty.

Downloading the Aarogya Setu app will be mandatory for all the passengers. Only those with a “green status” will be allowed to enter the airport.

Frisking of passengers has been asked to be minimised and to be carried out only if the door frame metal detector beeps. The draft SOPs also ask the Central Industrial Security Force (CISF) to not stamp passenger’s boarding pass in this phase.

The airlines have been told to conduct a secondary temperature check at the boarding gate before the passengers enter their flight.