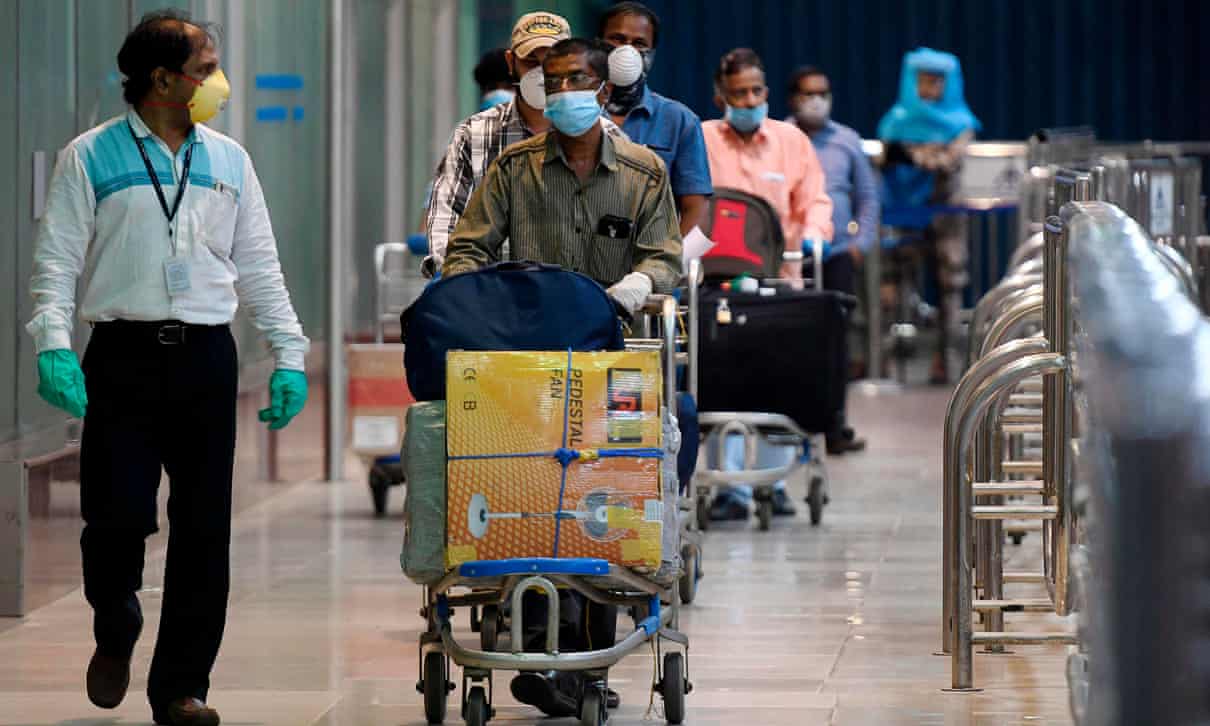 Relieved Indians are arriving at airports across the country on the first flights to bring home those stranded abroad, and others are en route on naval warships, in an extensive repatriation effort labelled the vande mataram (long live the motherland) mission.

Photos from inside a plane landing at Chennai airport showed the flight crew, who were tested for Covid-19 beforehand, wearing protective suits and smiling behind masks and visors.

Thousands of Indians have been stuck abroad since India banned all incoming flights in late March as part of a strict lockdown, which has been extended three times.

Students in the UK and the US ran out of money for food and workers in the Gulf who had lost jobs had no money on which to survive. Indians who were abroad for diagnosis or medical treatment found themselves stuck there for much longer than planned, without enough money to continue paying bills.

Every day for a week, eight or nine flights run by Air India will carry passengers home from 12 countries, mainly from the Gulf but also from the US, UK, Russia, Bangladesh, Singapore, Malaysia and the Philippines.Advertisement

Each flight will carry 200-250 passengers, to allow for physical distancing. Anyone who shows symptoms during the flight will be confined to a separate area.

Anshul Sheoran, the pilot of a flight that landed in Kochi, Kerala, from Abu Dhabi, told the media that doctors had trained him and the crew on protocols to be followed. “They taught us the correct ways of donning and doffing the PPE suits. We were told about the loopholes and the wrong practices. Wearing the suits meant we could not use the lavatory or eat during the flight,” Sheoran said.

Three of India’s naval warships have been deployed for the rescue operation. A naval official said one ship was on the way from Male, the capital of the Maldives, carrying nearly 700 Indians.

The government said those being brought home first had been selected on the basis of how urgent their need was to return, with priority given to those facing deportation, pregnant women, elderly people, students in difficulties with no income and those with medical emergencies.

The number of Indians to be repatriated over the coming weeks may be as high as 200,000.

The smiling faces of those returning home on planes presented a stark contrast with the migrant labourers who have been enduring their own “internal exile” in Indian cities during the lockdown.

Without jobs or income, they have also been desperate to return to their villages and families but have received little or no help from the government. So far only a few thousand have been able to go home on special trains.

Hundreds of thousands are still waiting in shelters. Many have given up waiting for the government to provide transport and are walking home. They are covering distances of hundreds of miles while carrying young children and their meagre belongings in summer temperatures of 40C (104F).

On Friday a goods train ran over 16 labourers who were walking more than 500 miles to their homes in Madhya Pradesh and had stopped to rest on the railway tracks.