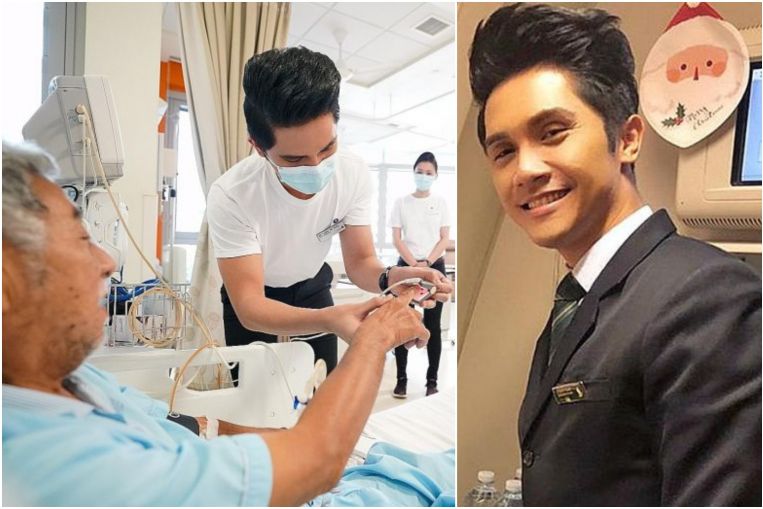 He has been a care ambassador at Ng Teng Fong General Hospital since April 21.

Some 800 SIA cabin crew are currently utilising the skills they have learnt on the job for alternative roles, helping Singapore’s fight against the coronavirus outbreak.

Besides serving in hospitals, they have also been deployed as transport ambassadors at public transport hubs.

SIA announced on April 25 an extension of flight cancellations to the end of June amid travel restrictions around the globe. Currently, SIA has passenger flights to just 15 destinations, compared with more than 130 normally.

“Being a cabin crew (member) has taught me to be proactive and sensitive while providing care for people,” Mr Faidhi, 32, said on Saturday. “While the transition (to my new role) was smooth, I always remind myself that extra care and concern must be considered while handling these patients who are unwell.”

Mr Faidhi is in a non-clinical role and, among other things, assists in attending to patients. He helps nurses with tasks such as repositioning patients in bed, taking their vital signs, noting meal orders and serving them correctly.

Covid-19: Don’t miss the latest on the outbreak and its impact

Stay in the know with e-mail alertsSign up

He acknowledged that it took him some time to become familiar with the apparatus and the medical equipment on the emergency trolley in the wards.

Mr Faidhi said that on his second day on the job in the hospital, he was part of a team handling a patient who had just died.

“I was taken through the process carried out on the body before it was handed over to the family. It was an eye-opening and emotional experience,” he said.

Flight stewardess Sarah Liew, 23, who has been with SIA for almost two years, has been a transport ambassador for about a month.

“I advise the general public to adhere to safe distancing measures and I help in crowd control. In this role, not only do I ensure the safety of the commuters but I also help to advise on the fastest and most comfortable route to get to a destination,” she said.

Miss Liew said that while she misses the interactions with people from all over the world during flights, her current role has allowed her to give back to the local community while still meeting and working with people.