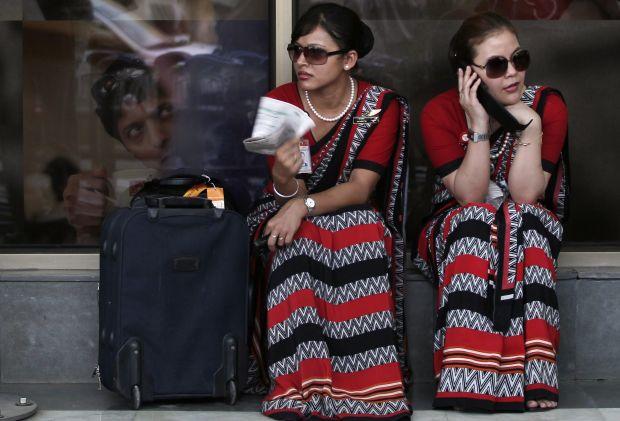 A year after the grounding of Jet Airways sent the sector into a tailspin, life seems to have come a full circle for India’s aviation employees. Fears of job loss, pay cuts, and income freeze are once again rife amid the disruption caused by the coronavirus.

On April 5, regional airline Air Deccan ceased operations, and sent its staff on an indefinite sabbatical without pay. Bigger players like Vistara, SpiceJet, Air India, GoAir, and IndiGo are staring at deteriorating balance sheets, which will remain under pressure for a while.

This has left many aviation employees, who were in any case leading a paycheck-to-paycheck existence, anxious about their future.

Those with relatively less experience have no financial cushion. “I live in a rented apartment in Mumbai, the cost of living is already too high and I don’t have much savings. The budget for this month has already gone for a toss,” a Vistara air hostess, who joined the airline four years ago, told Quartz on the condition of anonymity.

The carrier, a joint venture between Tata Sons and Singapore Airlines, sent 30% of its 4,000 employees on mandatory leave without pay between April 1 and April 14 to curb costs. However, the airline has made it clear that the current pay cuts will not impact the cabin crew as of now but the employees aren’t confident about the future.

For many, the pandemic has come as a rude shock as the aviation sector was showing some signs of stability in recent months. “I’m financially pressurised…because I never saw this coming. There has been absolutely no assurance from my airline as of now,” Aviral Arora (name changed), a pilot with state-owned Air India, with seven years’ experience, told Quartz.

Arora’s wife, a pilot with SpiceJet, added that she’s not optimistic about the sector taking off for at least a couple of years.

Speculations about the sector’s future are making others wary of their careers.

For instance, Abhishek Kaushik (name changed) from Delhi, a pilot with Air India is under a lot of pressure about his job security. To maintain his sanity, he says, he left his office chat groups to focus on other things.

But is it helping? “Not much,” he confesses. “My airline announced a 10% reduction in salaries for all employees. Around 200 pilots who were re-employed on contract after retirement have been relieved of their services till further notice as a cost-cutting measure,” Kaushik said. “The situation right now is very dynamic and grim.”

On April 2, Air India announced a pay cut for all its employees for the next three months. The carrier’s flying crew is yet to receive 70% of their February wages, say the airline’s employees’ unions.

Saloni Mehra (name changed), an air hostess with GoAir for three years is facing a similar situation. She’s been occupying herself with household chores, and physical workouts to keep her mind calm amid messages from colleagues warning of job losses. “No matter what I do, the stress always creeps in quietly and insidiously. After all, it’s my only source of income. My life depends on it,” Mehra added.

Her airline has promised its employees that there will be no job cuts. And the assurance may hold true, in her case.

The long-term consequences of the coronavirus pandemic will transform the workplace, education, diplomacy, globalization, fossil fuels, and more. No corner of the global economy will be unaffected.Learn more aboutWorld vs. coronavirus

Many senior pilots Quartz spoke to say airlines may not fire pilots and cabin crew, despite the current paycuts.

“From whenever we start operations, it will be a slow process of rebuilding and, therefore, a lot of layoffs are expected in three-four months. However, pilots and cabin crew will be safe,” said Kaushik of Air India.

Training of pilots and the cabin crew is an exhaustive and expensive process. Besides, the industry is already dealing with a shortage of pilots. In a conversation with Quartz in February, IndiGo’s senior vice-president and head of human resources, Raj Raghavan, acknowledged the same.

Yet, not all jobs are safe. Ground staff and people with little experience in departments like the cargo handling, or customer service will get the pink slip as the companies can do without them for now.

This, though, may ward off quality talent from entering the industry.

“With the existing job security, the industry will not be as attractive for job seekers as it used to be a few years ago,” said Siddhartha Kumar, a Delhi-based aviation analyst. “For someone who’s aiming to start his career, it’s definitely going to be challenging. As airlines will not be willing to invest in them and they are on the frontline to get fired first.”

Yet, many who are driven by their passion for the industry plan to stick around. “Money holds and will continue to hold, a secondary slot for me. I wish to continue as long as I am fit to fly,” said Kaushik.