US thanks Qatar Airways for transporting citizens 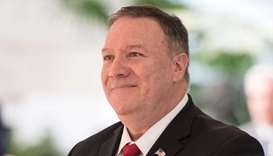 “Qatar Airways helped repatriate nearly one million people worldwide including tens of thousands of Americans. This should be seen as a point of national pride for all Qataris.
“Again, please accept my gratitude on behalf of all Americans,” Pompeo concluded.
In a tweet Friday, Qatar Airways said: “Many thanks to the US Government and to Secretary of State Michael Pompeo for their kind words of appreciation to Qatar and Qatar Airways. We have made it our mission for everyone to ensure we are #TakingYouHome @SecPompeo”
The airline had the other day announced that “In recent weeks Qatar Airways has carried over one million people home plus transported over 70,000 tonnes of medical equipment and aid relief, ensuring it is a reliable partner for passengers, governments, travel trade and freight companies in extremely challenging circumstances”.