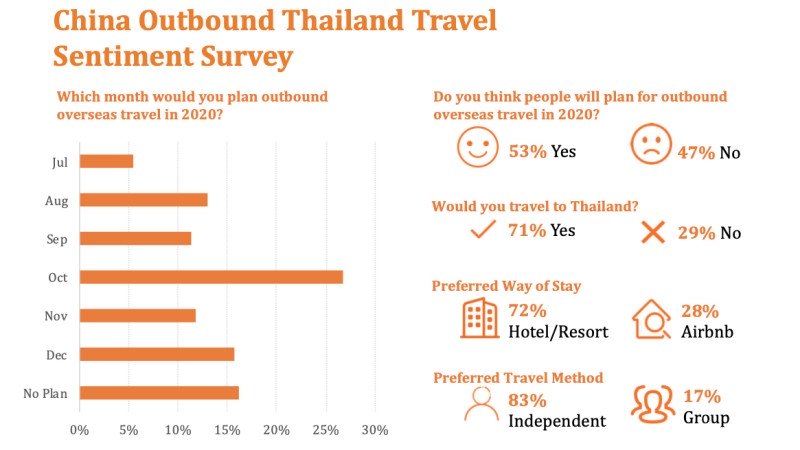 A comprehensive new survey of consumers in China’s first-tier cities has concluded that 53% of respondents would like to travel overseas within 2020. More so, the most popular months for trips abroad for the remainder of the year are August, October and December, report C9 Hotelworks and Delivering Asia Communications.

The newly released China Thailand Travel Sentiment Survey 2020, conducted in mid-April by C9 Hotelworks and Delivering Asia Communications, focused on key demand factors in the country’s reopening of the tourism economy. A strong positive message from the research is that 71% of Chinese consumers said they would like to visit Thailand, the report says.

Thailand is one of the most impacted travel markets by COVID-19 in Asia. The country hosted 39.8 million international visitors last year with China accounting for nearly 11mn arrivals. The expanded Thai tourism, hotel and travel sector contributes between 12-15% of GDP to Southeast Asia’s second largest economy, the report notes.

Using the China survey as a forecasting tool for the hotel industry, an interesting shift in a segment traditionally leveraged in the mass market is that 83% of potential visitors would choose independent travel versus a group tour. This led the survey organisers to ask, “What are the preferred booking channels for Chinese travellers to Thailand?” The top five in order were Ctrip (61%), Fliggy (16%), hotel websites (9%), Booking.com (5%) and WeChat (5%).

“Moving inside the data, another key insight of the report is breaking down destination preferences within Thailand. Respondents’ most popular holiday locations in order of popularity are Bangkok, Phuket, Chiang Mai, Koh Samui and Pattaya. Over 75% of demand was pinpointed in the top three destinations, said a release today announcing the report.

Commenting on the road to tourism recovery C9 Hotelworks Managing Director Bill Barnett said, “We expect Thailand’s reopening trajectory to initially be dominated by the domestic storyline but move quickly into inter-regional travel punctuated by the outbound China sector who are ready and willing to visit the country as demonstrated by the survey results.”

Looking forward for the remainder of the year, Mr Barnett noted that airlift is a critical enabler of the travel sector “as you can’t stay there if you can’t get there”.

“A quick indicator of airline activity on Flightradar24 clearly reflects how China’s considerable regional and low-cost airline (LCC) sector has gotten back into the air,” he said.

“While undoubtedly there will be a lingering global fear factor for travellers in the wake of the virus outbreak, Thailand’s favourable door-to-door flying time and vast network of approved routes to the Mainland supports lead indicator.

“Another is the appreciation of the Chinese Yuan (RMB) against the Thai Baht. After reaching lows in Q3 and Q4 of last year, driven done by an economic slowdown and trade war, the currency has continued on an upward rise in 2020, which equates to greater value for Chinese tourists to Thailand,” he added.

Rounding out the survey results Delivering Asia Communications CEO David Johnson, pointed out that the demographics of travellers from China were changing.

“The new China traveller is younger, more independent and more digitally influenced than ever. COVID-19 has had a profound impact on travel consumer mindsets and this generation has a burning desire to experience the world and new digital strategies are needed to reach them,” he said.