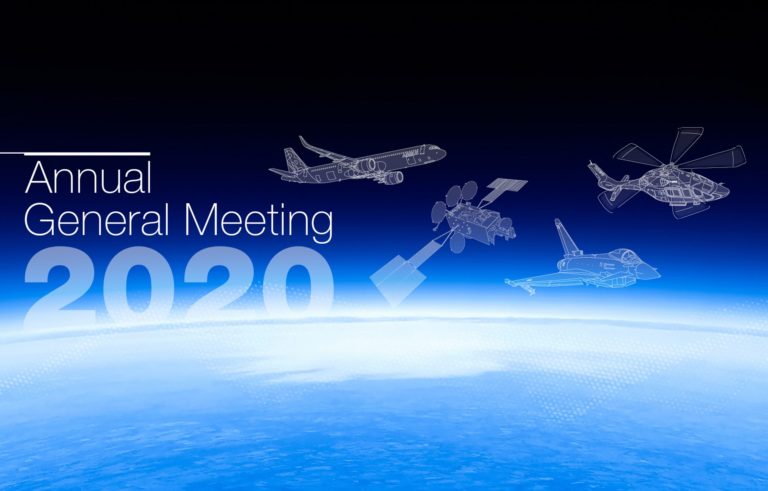 Airbus SE shareholders approved all resolutions on the agenda for its 2020 Annual General Meeting, including the election of two new directors, while René Obermann formally succeeded Denis Ranque as Chairman at a Board meeting immediately afterwards.

Owing to the global coronavirus outbreak, shareholders were encouraged to vote by proxy instead of attending the AGM physically in Amsterdam, in line with public health and safety measures. Shareholders showed a very high level of voting and strong engagement despite the COVID-19 situation, with 575 million votes expressed, up 5% compared to the 2019 AGM and representing around 74% of the outstanding share capital.

On 23 March, Airbus announced that it was withdrawing a voting item from the original AGM agenda related to the proposed payment of the 2019 dividend. The withdrawal of the dividend proposal was one of a number of measures announced by the Company to bolster liquidity and its balance sheet in response to the COVID-19 crisis.

Following shareholder approval, Mark Dunkerley and Stephan Gemkow each joined the Board as non-executive directors for a period of three years. Dunkerley has extensive experience of the commercial airline and aviation industry and is currently a Member of the Board of Spirit Airlines, Inc., while Gemkow is a Member of the Board of Amadeus IT Group and a former airline executive with 22 years at Deutsche Lufthansa AG.

The mandates of non-executive directors Ralph D. Crosby, Jr. and Lord Drayson (Paul) were each renewed for three years. Denis Ranque and Hermann-Josef Lamberti both stepped down as planned from the Board and its committees at the close of the AGM

At the meeting immediately following the AGM, the Board approved the planned appointment of René Obermann as Chairman of the Board of Directors. In April 2019, Airbus announced that Obermann had been selected by the Board to succeed Denis Ranque as Chairman. René Obermann has been an independent non-executive director on the Airbus Board since April 2018. He is a Partner and Managing Director of private equity firm Warburg Pincus and a former Chief Executive Officer of Deutsche Telekom AG. As previously stated, Denis Ranque asked to leave the Board to pursue other interests when his mandate expired at the close of the 2020 AGM, following seven years as Chairman.

“It has been a great honour to serve Airbus as Chairman these past years and I extend my best wishes to René, the Board and the Company as a whole,” said outgoing Airbus Chairman Denis Ranque. “I’d also like to thank shareholders for their support along these years and today for having voted through these important AGM resolutions at a very high level despite the COVID-19 outbreak. With a renewed management team, under Guillaume’s strong leadership, and an experienced Board, your Company is in good hands as it heads into its sixth decade.”

“I thank the Board for the trust they have shown in me to succeed Denis as Chairman of this great, visionary company,” said René Obermann, incoming Chairman of the Airbus Board of Directors. “I’d also like to pay tribute to Denis’ relentless efforts over many years that benefitted the Company. Under his oversight, Airbus was able to reach an important settlement on the long-running compliance investigations and establish its leading position in respect to corporate citizenship and excellence in governance. I look forward to working even more closely with the management team and my Board colleagues to help the Company address its immediate and longer-term challenges, and in particular our response to the COVID-19 pandemic.”

Shareholders approved the proposed remuneration policy, which includes the introduction of a sustainability component. This is in line with market best practices and is designed to reinforce alignment between the Company’s strategy, its values and the remuneration structure.