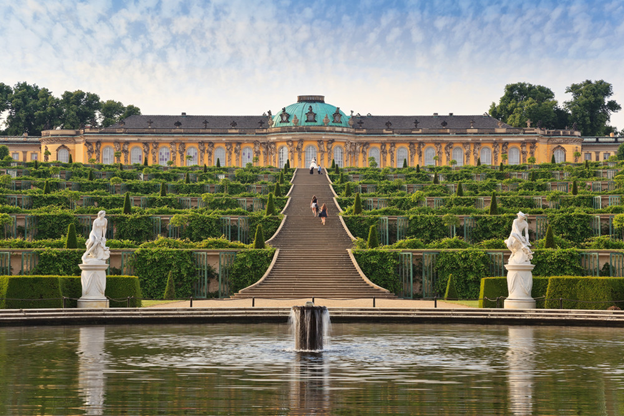 If after weeks of isolation, your home is beginning to feel a little cooped up, it might be fun to explore some more generously proportioned interiors. And this is indeed possible.

In the blink of an eye, the magic of the modern world allows you to make a virtual escape to visit the most majestic, and, even more importantly, some of the largest palaces in Europe.

The Palace of Sintra in Portugal

How about a spring jaunt to Portugal? in the current context, the real deal is probably not an option, but you can come close with a few clicks.

A jewel in the crown of Portuguese heritage, the Palace of Sintra is renowned for its Moorish decor and its singular silhouette with its two distinctive conical chimneys.

With a little help from Google, you can take a tour of the centuries-old royal residence of the kings of Portugal, which was classed a UNESCO world heritage site in 1995.

The Palace of Versailles

It is hard to refuse a stroll through the hall of mirrors. Even in the current lockdown, you can still wander through one of the most beautiful palaces in France without giving up the cozy comfort of your living-room couch.

Thanks to the miracle of virtual reality, you can saunter through the corridors of the former residence of Louis XIV, prance through the State Apartments and examine numerous works of art and furniture from all angles.

Google has also made it possible to take a tour of Sweden’s Skokloster Castle, a magnificent example of Scandinavian baroque architecture, which was built on the shores of Lake Mälar in the 17th century.

Renowned as the favorite residence of Frederick the Great, who would take refuge there with his dogs when he fled the pomp and circumstance of the Berlin court.

The Prussian king loved this palace so much, he even left instructions that he should be buried there on the terrace next to his vineyard house. These instructions were finally implemented in 1991, a year after the palace was declared a UNESCO world heritage site.