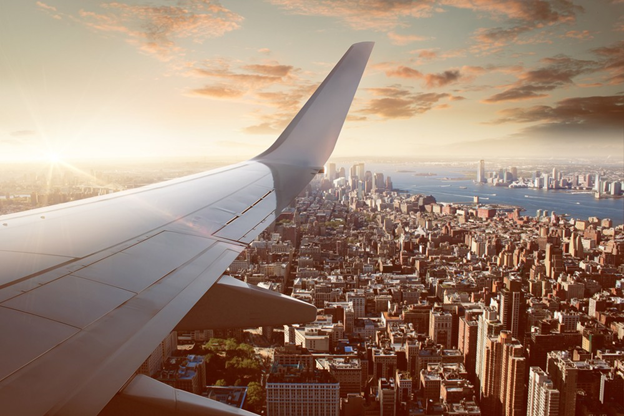 An aircraft flies over New York City, as seen from an overwing perspective. (Shutterstock/-)

Were it not for COVID-19, the latest stats on airline safety would have served as a boon to consumer confidence in the safety of air travel.

The latest report from the International Air Transport Association out of Montreal showed that airline safety, as measured by accident and fatality rates, improved in 2019 with an accident rate of 1.13, or one accident for every 884,000 flights.

“The release of the 2019 Safety Report is a reminder that even as aviation faces its deepest crisis, we are committed to making aviation even safer,” said Alexandre de Juniac, IATA’s Director General and CEO in a statement.

“Based on the 2019 fatality risk, on average, a passenger could take a flight every day for 535 years before experiencing an accident with one fatality on board.”

According to the report, the safest carriers hail from Europe, Asia-Pacific, the Middle East, and North Africa, which posted incident rates below the global rate.

Overall,  2019 saw a 17 percent dip in accident rates. In absolute numbers, that translates to eight accidents and 240 onboard fatalities.

For an even greater perspective, 4.5 billion passengers traveled on 46.8 million flights.