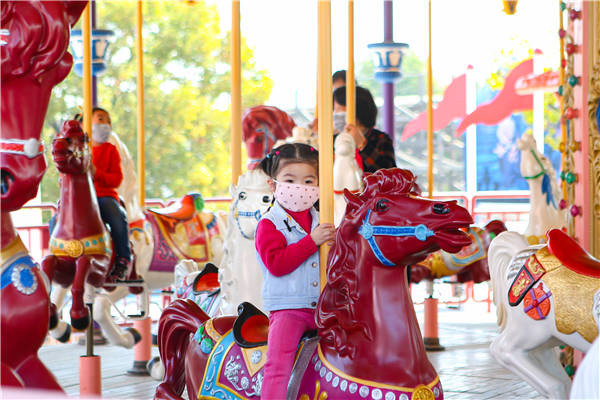 Several of the company’s ocean parks, like those in Qingdao and Yantai, Shandong province, have already been reopened to tourists, with more set to unlock their doors again. (Via China Daily/File)

As Chinese have been confined to their houses due to the COVID-19 outbreak for over two months, they had to cancel their travel during the Spring Festival holiday and take virtual trips instead, via online photos, short videos, and live streams produced by scenic areas.

Since China’s fight against COVID-19 began winding down, theme parks across the country have started to reopen, with strict measures in place to prevent further spread of the virus. Many promises to offer Chinese medical professionals free tickets throughout 2020.

Before entry, visitors are required to present their IDs and health QR codes and undergo temperature checks. They have to make a reservation in advance and wear a mask. Some theme parks regulate that mobile payment should be used instead of cash, as part of their non-contact service to reduce potential risk.

After the Spring Festival, the first national holiday is Tomb Sweeping Festival－which takes place between April 4 and 6－that serves as the best opportunity for theme parks to see a revival in fortunes and get back on track.

The report says many of the most popular destinations for the Tomb Sweeping Festival holiday are those that found favor with people during recent virtual travel activities, like Chengdu, Shanghai, Hangzhou, Shenzhen, and Guangzhou.

Shanghai Haichang Ocean Park attracted over 20 million viewers during its 30 live streams before reopening on March 20. It was closed on March 30 due to Shanghai’s strict policy to counter COVID-19, where some indoor scenic areas were recently required to close again such as Shanghai Ocean Aquarium and Madame Tussauds Shanghai.

“Children like to watch our live stream about polar animals like penguins. Livestreams allow us to build our brand and attract potential tourists, as a preparation for the time when they are ready and able to visit physically,” says Zheng Fang, senior director of a marketing department, Haichang Ocean Park Holdings Ltd.

Several of the company’s ocean parks, like those in Qingdao and Yantai, Shandong province, have already been reopened to tourists, with more set to unlock their doors again.

She says Haichang ocean parks have arranged their operations, such as the date of reopening and the specific areas that will be accessible, in accordance with the local government’s requirements regarding precautions for containing the further spread of COVID-19.

Haichang ocean parks have a strict, real-time, monitoring of tourist numbers and will control the outdoor and indoor flows if they surpass the regulated figures.

Zhang says that, in the company’s ocean parks, staff members work in shifts, and regular disinfection of the living environment and health checks of animals is performed around the clock. The staff has to ensure the animals’ food, such as fruits, vegetables, and fish, arrive on time and offer them a balanced diet.

All staff wear masks and have regular temperature checks, while all areas, ranging from offices, staff dormitories and entertainment facilities, are carefully cleaned and disinfected.

Shanghai Happy Valley was reopened on March 20, with more than 5,000 visits in the first three days. Its number of average daily visits in March was 1,660, about 24 percent of the number from the same period of last year.

“The difficulty is that COVID-19 may have a continuous negative influence on people’s willingness to visit,” says Zhao Shuai, marketing director of Shanghai Happy Valley.

Shanghai Happy Valley has made the best use of the time during the closure by upgrading and improving things around the park, maintaining and adjusting equipment, and disinfecting everything thoroughly. It has also improved its online booking system and electrical navigation map.

For popular rides, tourists can use 16 on-site ticket-collection machines to get a number and queue up virtually. Such measures save their time, enhance their experience and avoids the potential risk of having people assembled for a long time waiting in line.

Two weeks before the reopening, they held several emergency drills and trained their staff members for non-contact service.

For the safety of tourists, entertainment equipment, such as rides, will operate at 40 percent visitor capacity each time, with strict rules governing the distance between people.

Staff members have put signs every 1.5 meters in the waiting areas and seats of recreation equipment, to remind tourists to keep a distance of at least 1.5 meters from each other. Staff are also on-hand to guide visitors and maintain an orderly queue.

All indoor services and entertainment remains closed, such as performances and indoor dining, and some outdoor activities that may gather tourists in large, close proximity gatherings, such as parades are also suspended.

Authorities of Fantawild say that their theme parks have also suffered a loss of income from tickets, dining and shopping during the closure, and they have had to cancel activities like lantern shows and temple fairs planned for the Spring Festival holiday. It will need multiple parties, including theme parks and local governments, to work together to help restore the market.

Hangzhou’s Songcheng Park, which is owned by Songcheng Group has created several new performances, of different styles, during its closure in readiness for the reopening. It was planned to reopen on April 3 but had to postpone it due to the local government’s policy about the prevention of the further spread of COVID-19.

The group claims they’re one of the first companies in the tourism industry that announce that they will not reduce staff or salaries in the wake of the COVID-19 outbreak.

She attributes it to several reasons.

The local governments across China are supporting the tourism industry with preferential policies, theme parks are offering ticket discounts and taking strict measures to ensure tourists’ safety, and, domestically, China is now in the final stages of the COVID-19 epidemic.

“Theme parks are popular among couples with children and young people. The insiders are confident about the revival of theme parks, judging by the current situation that many are already open again. Also, Chinese visitors are willing to go out and enjoy themselves with families,” she says.

“Chinese tourists will probably focus more on short trips throughout this year, and theme parks should adjust their marketing strategies in accordance with that.”